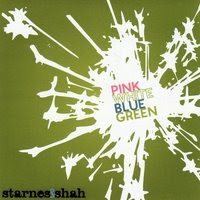 Dania Abu-Shaheen and Zilpha Starnes are New York and Boston wunderkinds Starnes & Shah. The duo made a name for themselves on New York City's Folk/Rock scene with gigs in venues such as Kenny's Castaways and The Living Room, garnering a reputation as a folk group with a dynamic live show. In May of 2009, Starnes & Shah released their third CD (2nd full length), Pink White Blue Green, featuring intelligent and melodic folk tunes with tight harmonies, is bound to gain Starnes & Shah critical attention. If you can imagine Neil Young crossed with the Indigo Girls you have a vague idea of what Starnes & Shah are about musically.

Starnes & Shah have a very unique sound in their harmonies. They don't blend exactly; it's more like their voices co-exist in harmonious fashion, yet both remain materially distinct. The result is harmony with just a hint of tension that's always beneath the surface. Consequently, not everything on Pink White Blue Green works for me as the listener. The more lyric or mundane tracks fizzle out a bit, but then there are songs like Fit, Fit, Fit and Romancing The Throne, where Starnes And Shah are at the top of their game. On the best tracks it's as if the producer captured a live performance at home sitting around a coffee table. The sound is edgy and raw and full of the bare character of both performers. Leave Sonny is the absolute highlight of the disc; an archetype of that raw and unrepentant sound that makes Starnes & Shah who they are. The songwriting here is exceptional; it's one of those songs you can imagine other artists finding and wanting to record for themselves. The second half of the CD is much tamer, and consequently lost me a bit. Other highlights include Half Hitch, Rocket Science and The Precious Face And Familiar Bride.

Pink White Blue Green is uneven and gets a little lost for much of its second half, but the first five tracks here are as interesting and enjoyable as anything you're likely to find in Folk/Pop music. Starnes And Shah have an amazing vocal harmony sound that sounds nearly as competitive as it is complementary. The tension they create in coming together adds an extra spice to the songs on Pink White Blue Green and causes intrigue in listeners. Starnes And Shah are definitely worth spending a little time getting to know.

You can learn more about Starnes And Shah at http://www.starnesandshah.com/. You can purchase Pink White Blue Green on CD or as a download at www.cdbaby.com/cd/starnesshah2.
Posted by Wildy at 1:49 AM