Review: Ariel - Sure Thing, You Bet! 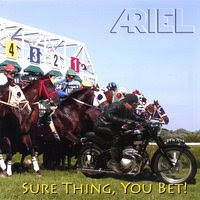 San Francisco rockers Ariel’s third CD, Sure Thing, You Bet! is a collection of familiar-surrounding classic rock originals. Released in 2007, Ariel has been gigging on the strength of this CD ever since. The mix of styles and sounds on Sure Thing, You Bet! can be a tad dizzying, both for the listener and seemingly, for the band.

Sure Thing, You Bet! opens with Are You Ready To Rock?; a tasty bit of old school Rock N Roll. It's a bit hokey but all in good fun, and the guitar work is pretty impressive. Wrequiem integrates pipe organ into a Rock arrangement in a moment that will recall Styx' early Prog forays. Bordertown opens with Spanish Guitar and reminds me a bit of Trout Fishing In America if they went a more Rock N Roll route. Climbing sounds a bit like early Chicago with a slightly harder edge. The lyrics are a bit mundane but the music is great. Ariel gets a bit into the socio-political-religious realm on The Message Song and The Fine Art of Proselytizing; the latter of which takes to task those who would push their beliefs on others. The ultimate irony is that the song appears to be full of the same sort of self-righteous sense it derides.

Much of Sure Thing, You Bet! is a bit disorganized; not so much like a coherent album structure but just a bunch of songs that Ariel had sitting around and threw together to fill out an album. Most of the songs are at least decent; there's just a lack of flow to the album that can become a bit distracting. Ariel ranges from Dr. Demento style novelty tunes (Church Of The Cosmic Cookie, They Won't Play Us In L.A.) to catchy, smart tunes with pop sensibility (Halfway To Harris, Crank Up The Victrola). The Pop sensibility here is sometimes two or three decades old, but hooks don't change regardless of how much distortion or effects you put them through.

My first impression of Ariel is that they are an aging cover band who have accumulated a fair amount of original material over time and finally decided to do something formal with it. It would explain the scattershot stylistic changes throughout the album that cover Styx, Chicago, The Ramones, Motown and novelty tunes. Cover band is considered by some to be a dirty word, but most bands or musicians get started that way, and from an instrumental perspective as a singer you couldn't complain about having Ariel behind you. The vocals are a bit hit or miss but are mostly spot on. In general, Sure Thing, You Bet! is a fun and entertaining listen that will appeal primarily to Baby Boomers and fans of the lighter side of 1960's and 1970's Rock N Roll/R&B. If that's your thing, then Ariel is for you.

You can learn more about Ariel at www.myspace.com/arielrockstheworld. You can purchase a copy of Sure Thing, You Bet! at www.cdbaby.com/cd/arielsounds, or you can download the album from iTunes.
Posted by Wildy at 5:00 AM