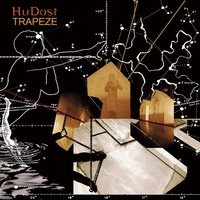 HuDost, based in Montreal and NYC, defy not only national classifications but musical ones as well. Vocalist Moksha Sommer has travelled the globe, studying no less than 12 distinctive vocal styles from around the world. She also contributes harmonium, piano and accordion. She is joined by Jemal Wade Hines on guitar, vocals, bouzouki and bendir to form HuDost, spinning musical webs from all corners of creation. HuDost's CD, Trapeze, is driven by the love of music from all cultures and a seemingly evolutionary songwriting style. Adding to the zeitgeist of the Trapeze is the fact that Sommer was diagnosed with a brain tumor leading up to the recording of Trapeze. The album was recorded between the time of diagnosis and surgery, and reflects some of the urgent energy of someone who truly doesn't know what tomorrow may bring. All of these stands were pulled together by the masterful production skills of Malcolm Burn (Bob Dylan, Emmylou Harris, Daniel Lanois, Peter Gabriel).

Trapeze opens with Trespasser, an energetically mellow bit of layered musical angst that makes Radiohead sound Top-40. Sommer's vocals are a gorgeous thing to hear, and don't so much float over the song as fly down upon it like an eagle on the hunt. Royal Mountain laments the loss of a burial place for the poor in the face of progress. It's a lovely tribute that's in both English and (Canadian) French, and reminds us that the fate of those who were buried there will inevitably be our own. Royal Mountain is set in a great mellow pop arrangement that with other subject matter would likely be real radio fodder. Waiting is presented in the form of a near-Appalachian folk tune, complete with Country/Americana accents.

BreakDown BuildUp is one of the more interesting songs presented on Trapeze, mixing Western and Eastern elements around a great rock melody. Sommer truly shines here in a performance worthy of significant attention. BreakDown BuildUp is a definite highlight track. Waking is a song of thanks for new opportunities and new roads; the song is gorgeously dark with hopeful undertones. Sommer is at her best here, singing with a conviction that is unsettling. Drowned In White plays like an old madrigal choir tune, full of dark, minor-key harmonies and a church-like sense of grace. Sommer shines again on an inspired vocal line set against an instrumental background that is thrillingly complex. Trapeze closes out with something of a reprise of Trespasser.

Have patience with HuDost. It took me three or four listens to really get into Trapeze, but the effort was well worth it. Jemal Wade Hines is a masterful musician in his own right, and Moksha Summer will blow listeners away with her understated vocal grace. There are shades of early Sarah McLachlan here, but just shadows. Summer and Hines are a one-of-a-kind duo. Whatever you want to try to classify them as, HuDost is guaranteed to energize your musical synapses with music that never rests, never stops moving. In conversational terms, Trapeze is an album that never really raises its voice yet commands the room. Trapeze is a classic.

You can learn more about HuDost at http://www.hudost.com/ or www.myspace.com/hudost. You can purchase a copy of Trapeze at www.cdbaby.com/hudost5.
Posted by Wildy at 5:10 AM