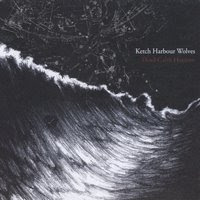 Toronto's Ketch Harbour Wolves are the darlings of that city's Indie Rock Scene, showcasing at NXNE for the past 3 years as well as at 2009's Canadian Music Week. Taking their name from Ketch Harbour, Nova Scotia, where the seeds of the band were born, Ketch Harbour Wolves wow crowds with strongly emotional songs set in powerfully layered arrangements. The Tragically Hip meets Interpol might be one sonic image to help you understand their sound, but ultimately Ketch Harbour Wolves manage only a passing resemblance to either band on their way to a sound that's distinctly original. Ketch Harbour Wolves released their sophomore EP, Dead Calm Horizon, in 2008, earning praise as one of the 10 hottest bands in Canada from one reviewer.

Dead Calm Horizon opens with Words, an ambient and richly layered acoustic composition featuring significant vocal harmony work in the song structure. The driving nature of the song manages to not be at odds with its more lyric sound, drawing in listeners into a quiet vortex of sound and emotion you won't want to escape from. Leaves is more straightforward, layering cello, guitar and piano into a traditional yet lush Rock arrangement with a philosophical bent. So Long To The Ground is a bit obscure for meaning, but is an amazing composition that will stick with you in spite of not standing out specifically for melody. This is one of those songs that have a certain je ne sais quoi that taunts the listener without ever truly revealing itself. Midnight Dark Water is an upbeat and poppy exploration of the psyche of a man who guides ships through storms with his hands firmly on the wheel. The subject and arrangement are so completely at odds that the combination works in a burst of sheer and joyful surprise. Dead Calm Horizon closes out with Letters, a request and nearly a secular prayer.

Ketch Harbour Wolves are distinctive and original without completing blowing the mold on their sound. The arrangements here are highly pleasant to listen to, even if the lyrics are occasionally a bit out of left field. A rainy afternoon spent with Ketch Harbour Wolves' Dead Calm Horizon would be well spent.
Rating: 3.5 Stars (Out of 5)

You can learn more about Ketch Harbour Wolves at http://www.ketchharbourwolves.com/ or www.myspace.com/ketchharbourwolves. You can purchase a copy of Dead Calm Horizon at www.cdbaby.com/cd/khwolves2, or you can download the album from iTunes.
Posted by Wildy at 6:07 AM