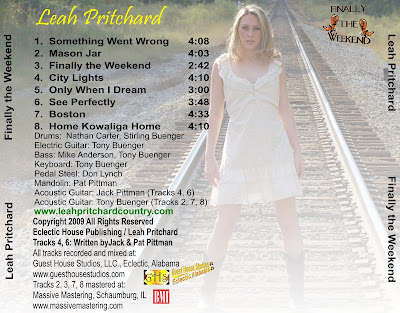 Alabama's Leah Pritchard is a country singer/songwriter with a Rock N Roll sensibility about her. A finalist in CMT.com's "Music City Madness" contest, she is also a competitor in the Colgate Country Showdown contest that helped launch the careers of Garth Brooks, Martina McBride, Toby Keith and others. Pritchard's first CD, Finally The Weekend is a production-quality demo that likely holds the seeds for a full debut CD.

The first thing that stood out to me about Pritchard is that even though she claims a strong affinity to Country Music, there appears to be an equally avid love of Rock N Roll that shines through in her music. Pritchard's voice isn't pretty, having a brassy quality that makes for a very interesting and unusual sound. Pritchard does appear to have some breath control issues both with phrasing and occasionally pitch, but reminds me heavily (in sound) of folk rocker Jess Klein. Finally The Weekend opens with Something Went Wrong, a Rockin' Country tune about the aftermath of a bar fight. The song is a bit sophomoric with awkward lyric construction. The arrangement is very simplistic and probably is more Rock than Country. Mason Jar is a bit more nuanced but retains the same lyrically awkward bearing of Something Went Wrong. The last line of the chorus is a classic, but just doesn't fit with the rest of the song. Finally The Weekend is a song for blowing off steam after a hard week. The song is very upbeat yet shows off some of the pitch and breath control issues I referenced in stark examples. Boston is offered up in a great country arrangement. This is my favorite song on the CD. Finally The Weekend closes out with Home Kowaliga Home, an ode to Pritchard's hometown that sounds pleasant but just doesn't seem to carry the conviction you might expect from such a song.

Finally The Weekend was a tough CD to review because there are some very good elements here and there are some unsavory ones as well. Pritchard has a great band (The Dirt Road Band) around her and a distinctive vocal sound that may work in her favor, but the quality of songwriting is just too young and unpolished to be truly viable in the commercial realm. Add to this pitch issues that surface at random times throughout the CD and you have a recording that's just not ready for prime time. Pritchard's press materials talk about her passion and high energy, and I have no reason to disbelieve that these things are there, but they do not come through on Finally The Weekend. Pritchard has potential, and collaborating with a more mature and accomplished songwriter would probably have critical and long-lasting benefits on Pritchard's development. Formal training with a coach focusing specifically on breath control would also be of benefit. The sound is intriguing enough to make us want to wait and see on Pritchard. The issues noted here are all fixable and may work themselves out in time.

You can learn more about Leah Pritchard at http://www.leahpritchardcountry.com/, where you can purchase a copy of Finally The Weekend.
Posted by Wildy at 6:10 AM