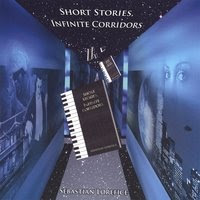 Australia's Sebastian Lorefice is a respected musician, composer and educator. Lorefice has been active as a performer since the early 1980's, forsaking the band life in 1997 to focus on education and composing. Lorefice's compositions dwell largely in the jazz realm, although elements of Rock, Lounge and even Space-Age electronic musical forms show themselves from time to time. Lorefice's most recent release, Short Stories, Infinite Corridors covers all the bases stylistically.

Short Stories, Infinite Corridors opens with Soldier, the most generic piece on the record, mixing jazz and a soaring rock guitar that sound great but don't really excite the listener. Street Gangs and Water Slide head for the late-70's/early-80's Lite Jazz/R&B sound that grew up as a counter-reformation to the Disco thing. The vibraphone play in Street Gangs is stellar, and there's a lot going on underneath. This is one of those tunes you can listen to many times over and keep discovering new things buried in the instrumentation. Your Inviting Eyes offers up dinner music that refuses to sit in the background but asserts itself as exciting guest that incites conversation.

Lorefice refuses to stand still, going experimental on Espionage, which uses mostly organic instrumentation to remind practitioners of ambient and experimental Electronica that their style isn't original after all. Shaolin Temples is a composition for the academics in the audience, engaging in a brand of intentional musical cognitive dissonance that's more of an effect than compositional tool. Lugosi's Lullaby, on the other hand, is brilliant. Lorefice plays the role of a slightly twisted James Horner with a composition that is cinematic in scope and sound. He manages to pull these lovely snatches of melody out of a dark and foreboding musical landscape like the Northern Lights spark out of the inky blackness of night. Lorefice gets his Space-Age hat on for UFO File and Hostile Planet with similar results. UFO File gets pretty messy in the middle, with instruments rushing to fill the sound but stepping all over one another in the process. Hostile Planet simply sounded unimaginative; a sewn together set of mini-themes could be dissected, scrambled and reassembled and not suffer compositionally.

Short Stories, Infinite Corridors runs the gamut from bland to brilliance, depending on the song. Lorefice displays obvious talent with pen and stave, creating a few magical moments (Lugosi's Lullaby, Street Gangs, Your Inviting Eyes), but writes mostly in academic and esoteric forms that may not be accessible to the casual listener. There's nothing wrong with this, of course, but it does serve to minimize the sphere of the music. In balance, the positive definitely outweighs the negative, and Sebastian Lorefice creates some highly memorable moments for those who do tune in.

You can learn more about Sebastian Lorefice at http://www.sabojams.com/. You can purchase Short Stories, Infinite Corridors on CD or as a download at www.cdbaby.com/cd/lorefice.
Posted by Wildy at 5:10 AM