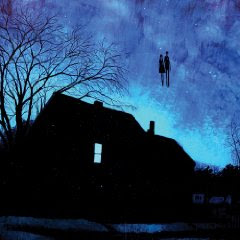 Fans of 1990's Punk rejoice. Eric Richter of Christie Front Drive (one of Alternative Press' 23 Bands That Shaped Punk) is back with his later project, Golden City, and a self-titled debut CD that fans of the Alumnus of Christie Front Drive, Antarctica and The 101 will appreciate. Produced by Ian Love (Rival Schools, Cardia), Golden City features a slightly more refined sound than Richter's past work but doesn't sacrifice an ounce of the energy of bygone days. Initially formed in Brooklyn as a fun side project, the MySpace reaction to posted tracks was so resounding it convinced Golden City to play out more and continue to write together. The culmination of that work is here.

Golden City opens with Gray, a pop-hook laden bit of alternative sonic noise that's a great listen. Enveloped in fuzzy parallel guitar parts is a catchy melody and a bright and air pop arrangement with just enough noise to make the turn into Alternative Rock. Diamond Suits keeps up this vibe, in a mildly understated Pop/Rock tune that should have some commercial legs about it. Cars In Space is a bit more compact than the first two tracks, but retains the same delicious Pop sensibility. Big Country is built around a simplistic but catchy guitar riff and a melody line that will stay with you. This is probably the most commercial track on the disc. Cavalry has a messy, garage sound about it and reminds me a bit of Canadian rockers Lowest Of The Low. Golden City gets back to the pure fuzzy pop on Stars, although the vocal line could have been brought out a bit more in production (it gets muddy beneath the guitars at times). Hit The Ground is the best bit of songwriting on the CD, with legs for both Pop and Modern Rock radio formats.

Golden City has a very accessible Pop Style while retaining enough Alt/Fuzz/Grunge sound to appeal to Rock N Roll fans. This isn't overly complicated songwriting, but it captures hooks and melody lines that will stick with listeners after the disc stops spinning or the MP3 stops playing. Don't expect Golden City to end up with significant radio presence, as they're probably a little too poppy for Rock fans and a little too Alternative for Pop radio, but this would be one exciting band to see live. Make sure you check out Golden City.
Rating: 3.5 Stars (Out of 5)

You can learn more about Golden City at www.myspace.com/therealgoldencity. You can purchase a copy of Golden City at Amazon.com, or you can download the album from iTunes.
Posted by Wildy at 5:00 AM