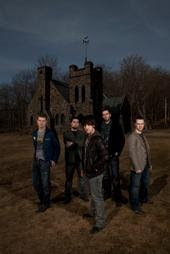 Mile Marker Zero might just be the most exciting band to come out of the I-95 corridor in recent memory. The New Haven, Connecticut quintet has been together since 2003, when several band members were enrolled in Western Connecticut University’s school of music. Mile Marker Zero’s brand of Progressive Hard Rock wins them fans every time they step on stage, and the word of mouth buzz has spread quickly in the Northeast United States. The band has already gained enough respect to be offered opening spots for artists such as Spocks Beard, Porcupine Tree and Geoff Tate (Queensryche). With the release of Mile Marker Zero, their fourth album, the band looks to take a big leap onto the national stage.

Vocalist Dave Alley has the sort of charisma and voice that make him a big-time rock front man, and guitarist John Tuohy has guitar chops that would make Wayne and Garth spout their class “We’re not worthy” refrain. The rhythm section of Doug Alley and Tim Rykoski bring vibrant life to the music of Mile Marker Zero, and keyboard master Mark Focarile always seems to provide the perfect fills and atmosphere to flesh out the band’s guitar-driven opera. Mile Marker Zero makes a distinct impression on CD, but it’s the stage where their music has its fullest effect, and word of mouth about live shows has been vibrant.

Take some time to check out Mile Marker Zero, including our review of Mile Marker Zero, their eponymous fourth album. And be sure to visit http://www.milemarkerzero.com/ and www.myspace.com/mmz to learn more about a band determined to carry all things Prog into the next generation.
Posted by Wildy at 12:01 AM