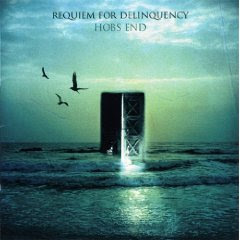 Requiem For Delinquency is the musical projection of Faron Chance Morrison's muse. The classically trained composer writes from a kitchen sink of ideas and styles and funnels them into cohesive compositions on the band's debut CD, Hobs End. Electronic music with a spiritual component is the goal of Requiem For Delinquency, a point to be decided by listeners if ever there was one.

Hobs End opens on a mellow note with The Work Of Science, a rhythmic but mellow electronic composition featuring spoken word voiceovers and a sparse vocal line. The Work Of Science doesn't recommend the album or itself highly; it's a pleasant listen but really doesn't stand out in significant fashion. Picture Viewer raises the tempo a notch or two but retains the same one-dimensional sound from the first track. The electronic medium always runs the risk of monotony, making the use of dynamics of utmost importance. It just doesn't happen here. Fairytales opens with a sample of John Cleese saying "And now for something completely different"; a quote from a Monty Python film of the same name. It's marginally appropriate, as Requiem For Delinquency does seem to rediscover dynamics to a small extent, and the song itself is structure more like a pop/rock song, but there's still a lack of vitality beyond what is evidenced in the dance beat. It's almost as if Requiem For Delinquency is going through the motions.

Before Ourselves and Cemetary maintain the automaton approach to music, sounding dispassionate and cold regarding subjects which must have some emotional impact for the band considering they chose to write about them. Time seems to have a bit more life to it, although the landscape really doesn't change a great deal. Unfortunately things just don't get much better. Songs such as They, It Really Mattered, The Motor Area and Mechanism continue in a vein that's more cybernetic than human. All emotion and real sense of direction is wiped away leaving strictly clinical applications of notes, chords and variations in rhythm that create movement largely devoid of life. I trust that Requiem For Delinquency will find a fan base, particularly for dance/club/lounge aspects of the Hobs End, but the compositions presented here simply fail to grab the listener.