Review: Eat Sugar - It's Not Our Responsibility 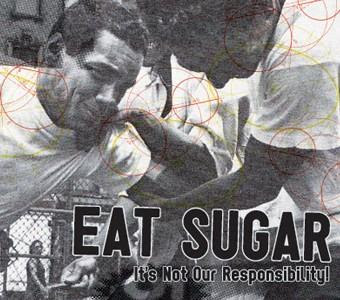 Eat Sugar - It's Not Our Responsibility
2009, Eat Sugar

Cincinatti, Ohio's Eat Sugar comes back with their frenetic mix of Punk and Electronic Rock for their Sophomore EP, It's Not Our Responsibility, available September 1, 2009. The seven song EP was recorded and produced by Enon's John Schmersal, and captures the rapidly evolving sound of a band still finding its direction. The title was taken from the utterance of a promoter on a 2008 tour of the UK, and reflects the somewhat scattershot yet charming collection of tunes within.

It's Not Our Responsibility opens with Seeing Red, a Synth-heavy post-punk/New Wave hybrid that's highly danceable in spite of turning out to be something of a sonic mess. Distortions Of The Heart drags Psychedelia kicking and screaming into the electronic age in a musical rant intertwining multiple effects into what might be loosely considered a melody. Pop Singer is something of a musical still life, a reflection that's more about sound than structured progression. Suddenly Eat Sugar takes a turn; having shown off their more experimental and progressive musical ideas, the band heads back for the Pop side of the spectrum with It Will All End In Tears. I didn't say it was radio Pop, mind you; more like Fatboy Slim ala Tim Burton, but the creepy arrangement makes this an interesting listen. So Into You carries decent pop intent and construction and might just have some commercial punch when all is said and done. The EP closes out with Falling Out. Falling Out has a Noise aesthetic wrapped up in a 1980's New Wave Sound. It's a daring combination that works.

Even at a relatively short seven songs, It's Not Our Responsibility shows two clear and distinct sides of the band. The first four tracks reflect an experimental outfit based heavily in electronic creation that is probably fun for those involved and for the small demographic that get hopped up over Noise. The last three tracks reflect more of an "out of left field" pop aesthetic wrapped up in electronic and electric instrumentation that's just normal enough to get considered in the popular realm and just unusual enough to get noticed. I suspect Eat Sugar will continue to develop their sound, which might just be one of the most original ones I've come across in the past year and a half. I can't say I liked everything presented on It's Not Our Responsibility, but I was challenged by what I didn't like. The lyrical content wasn't anything spectacular, but the music is interesting.

You can learn more about Eat Sugar at http://www.eatsugarmusic.com/ or www.myspace.com/eatsugarmusic. It’s Not Out Responsibility will go on sale September 1, 2009. Except availability through Amazon.com, CD Baby and iTunes.