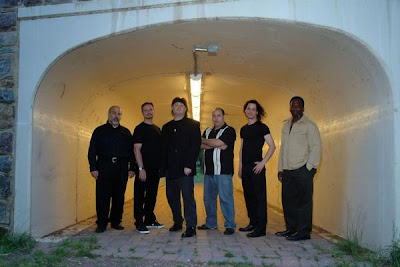 Kindred Souls is a six-piece band hailing from the Jersey Shore that has begun to make some serious noise on the New York City scene. Mixing Rock, Pop, Jazz, R&B and Soul, Kindred Souls try to create music that doesn't so much cross boundaries as transcend them. Lead vocalist Jeff Rafferty sounds like a pop band leader, and with the band he creates fresh and peppy musical scenarios against which he can apply his vocal wiles. Kindred Souls' latest recording, Social Ninja, is a four-track EP that displays some of what makes them so popular a live band, and some of the distance they still need to go in bringing that energy and panache onto recorded medium.

Social Ninja opens with Whatchagonnado, a catchy, if repetitive slice of dance rock that is bound to get some popular attention for Kindred Souls. Losing You is a gothic bit of 1980's Pop/Rock, with the same sort of soaring hooks that decade is know for presented here in darker aspect. Awhile shows shades of Darius Rucker and Neil Sedaka in a gentle Pop/Rock Arrangement. The chorus gets a bit repetitive but is decent for all of that. High Wire I didn't enjoy quite as much as the rest of the EP; it seemed to lack the inspiration and energy Kindred Souls brought to the first three songs.

Kindred Souls has real potential as a band. There's a certain Pop spark in the music presented on Social Ninja, but it can be fleeting at times. I suspect this is just the case of a young band learning to funnel the energy and commitment they put into a live show into a studio. The ability to get up for a sound booth they way you do for a crowd can be learned, but it takes some time and effort. Kindred Souls show flashes, and an ability to craft decent Pop songs with a bit of flair. I have no doubt that the next trip into the studio will produce even greater things.

You can learn more about Kindred Souls at www.myspace.com/kindredsoulz. You can purchase a download of Social Ninja from iTunes.
Posted by Wildy at 5:00 AM