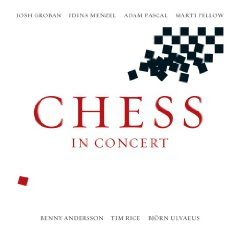 On May 12th and 13th of 2008, London's Royal Albert Hall came alive for a concert production of the musical Chess. With a score by Bjorn Ulvaeus and Benny Andersson (both of ABBA), and lyrics by the legendary Tim Rice, Chess has become one of the cult musical hits of the last twenty-five years. Chess has seen multiple versions in its first quarter century, many mixing and matching elements of the original West End and Broadway productions, but Tim Rice declared this concert version to be the "official" version of the show. There are no less than six recorded versions of the show that have been sold at one time or another, and each varies a little or a lot from the others. In conceiving this performance, an all-star cast was chosen to perform with the City Of London Philharmonic Orchestra. World-renowned singing star Josh Groban reprised the role of "The Russian" Anatoly (he previously performed as Anatoly in a 2003 Actor's Fund Of America Concert), while Idina Menzel (Wicked, Rent) took the lead of Florence. Rent's Adam Pascal is Freddie (The American). Other principals include Clarke Peters as Walter, Marti Pellow (Wet Wet Wet) as the Arbiter, David Bedella as Molokov, and Kerry Ellis (Wicked - London) as Svetlana. Reprise records released Chess In Concert as a DVD, a 2-CD set and a one CD highlights disc on June 30, 2009. A special edition combination CD/DVD is available solely on websites of stars Josh Groban and Idina Menzel.

Chess is a Cold War musical that views the political struggle between the United States and The Soviet Union through the prism of the 1972 World Chess Championship. Freddie, The American, is loosely based on the character of former World Chess Champion Bobby Fischer, while Anatoly has been speculated as having basis in the lives of Russian Chess Masters Anatoly Karpov and Victor Korchnoi. Granted this recording can pick and choose from two separate concerts for the material presented on CD and DVD, but the recording is nearly flawless. Fans of Idina Menzel may be a bit surprised to hear a more lyric vocal style from the Tony winner; hitting some notes in head voice you might never imagine after hearing her belt her way through Wicked and Rent. Her performance is outstanding, as is that of Groban. As a longtime fan of the show it was a bit jarring to hear Groban voice the role of Anatoly without a Russian accent, particularly in light of David Bedella's incredible Russian accent as Molokov, but Groban's so good it just doesn't matter in the end. Perhaps the most pleasant surprise is Adam Pascal as Freddie. Pascal is a great singer, which I knew, but he took the role of Freddie right over the top, putting in the best vocal performance in that role of any of the six recordings now or previously in print. The other pleasant surprise was Kerry Ellis. I hadn't come across Ms. Ellis before, but it shouldn't surprise considering her status as leading lady in the West End production of Wicked (and previous stint as Elphaba on Broadway as well). David Bedella was perfect as Molokov, and Marti Pellow put in a strong vocal performance as the arbiter, but may have been miscast, sounding less than authoritative in a role full of its own power.

There isn't a bad moment on the disc, although Menzel's stage pronunciation gets a bit over-emphasized in the recording on a couple of occasions (this is more of a production issue than anything). The City Of London Philharmonic is flawless throughout, and the ensemble pieces sparkle and shine like jewels at the bottom of a sunlit stream. Rice's lyrics are as sharp and enduring as ever, and the score speaks for itself. Highlights abound. Groban pulls off an amazing vocal performance in Where I Want To Be, and Menzel knocks it out of the park on her first solo venture, Nobody's Side, with a tough-yet-vulnerable feel that defines the character of Florence. Pascal and Menzel find an interesting bit of chemistry on Florence Quits, where Freddie goes Brooklyn on Florence and she gives it right back. The long association of Menzel and Pascal may have helped out here, but they sound like two lovers tearing each other apart.

Quartet may be one of the finest ensemble pieces this side of Frank Loesser's Fugue For Tin Horns, and even though this particular version isn't my favorite it's still extremely well done. Embassy Lament is enhanced as a quartet rather than the original duo, providing light moment with some gorgeous harmonies. Two particular diva moments stand out in the show as well. Idina Menzel owns the stage, crowd and hall on Heaven Help My Heart, proving that she can handle a lyric line as well as she can defy gravity. Likewise, Pascal takes Pity The Child home where it belongs. This is perhaps one of the finest male solo pieces in the Rock Musical era, and Pascal doesn't disappoint. Josh Groban, never one to be left out of the discussion, brings his own moment on Anthem, making any debate regarding accents moot once and for all. Kerry Ellis even takes a turn on Someone Else's Story as a lead up to her epic duet with Menzel on I Know Him So Well. Ellis' full, deep tone balances Menzel's edgier sound so perfectly you'd think they were born to sing together. Pascal also takes One Night In Bangkok, the biggest hit from the show, and creates a reading that's better than the original.

Chess In Concert will bring a collective wow from fans old and new. The show never really got much of a chance in the US because it was so badly butchered for the Broadway run, but there's a reason it keeps getting revised and revived in small runs all over the world. Rice, Ulvaeus and Andersson managed to create a bit of theater magic in Chess. Chess In Concert has been declared the definitive recording of the show by none other than Tim Rice, and so it shall be. It's only a matter of time before the show makes a return to London's West End and perhaps even Broadway. For now, Chess In Concert is a magical take on a show you can't afford to have at least a passing acquaintance with. Chess In Concert is an essential listen; a Wildy's World Certified Desert Island Disc; a classic. Don't miss it.

You can learn more about Chess In Concert at http://www.chessinconcert.com/. You can order a copy of Chess In Concert from Amazon.com. There is also a DVD available and a highlights disc. The concert is also available through iTunes.
Posted by Wildy at 5:20 AM

It was a grand experience to see these icons of pop giving a receptive audience exactly what they came to see. Our applause after each song didn't seem to be enough recognition for the decades of great lyrics and music they've produced. That they are different on-stage performers is part of the alure.

Surely you meant 'Frank Loesser's Fugue For Tinhorns'. Damon Runyon only wrote the short stories Guys and Dolls is based on.

You, too, can publish a blog post on too little sleep!

Seriously, thanks for pointing that out. Not sure how I got those wires crossed, but I've corrected the reference!
...Wildy

I have been a long time lover of Chess the musical and was looking forward to the DVD of the concert. However, having watched it I feel it was spoiled by idina Menzel who thinks that Florence is a part to be screeched out in a nasal tone as if trying to win in shouting match. She obviously had trouble hitting the notes and could only reach them by screaming. Her mouth opened so wide it was like looking down the blackwall tunnel.