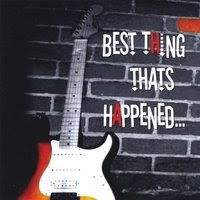 Coventry, England is home base for Rob Halligan, an exciting singer/songwriter who’s unlikely to remain unknown to you for long. With highly personal songs about faith, life, politics and complacency, Halligan used his guitar and pen to take on the world. As a member of The Goldsmiths, Halligan gained notoriety on the UK Pub circuit in the late-1990’s. After the death of his father at the World Trade Center on September 11, 2001, Halligan experienced a changed in direction for his music. Halligan can be found playing these days alongside rock, punk or even folk acts in any sort of venue. Halligan’s latest effort, Best Thing That’s Happened, is finely nuanced, intelligent and incredibly well-written. If you’re looking for the next big thing, Halligan would be a good bet.

Best Thing That's Happened opens with Dungeon Ghyl, an upbeat song about faith and belief and about the first realization of those seeds inside of a person. Musically, this sounds like something you might hear from a band like Matchbox 20 or some other iconic aughts Pop/Rocker. Blue Jeans gives the album its title; it's a love song that's focused on the things that really matter, symbolized by a pair of comfy jeans. This is great pop song craft done with stylistic yet understandable imagery. Christian's Brother is a heartfelt song about a step-brother with whom the narrator has had a falling out. The story is intelligently and lovingly told in song, with a great melody and arrangement to back it up. Halligan returns to religious themes on I Will Climb in what could only be a letter/prayer to Jesus in song. Unlike a lot of Modern Christian pop, this is not about creating emotional effect in others or spreading the news, but a personal statement, similar to a diary entry, put into song.

David's Song celebrates a friend most people have had at one point or another in their lives; the person who can just let go and be himself no matter what the world might say. It's a great song about the human spirit at it's most free and is done in a wonderfully vibrant arrangement that will have you wanting to dance. Halligan sounds a bit like Neil Diamond on Friend Of God, a song that suggests that there is comfort in knowing (or at least believing) where you're going. If I Will Climb was a letter to Jesus in song, You may well be the answer. This will be a highly affecting song for some, but is unlikely to catch on outside of religious circles. The song itself is extremely well-written, and could be mistaken for a highly-emotive love ballad if not for a couple of lines pertaining specifically to the crucifixion. Not On Your Own finds Halligan sounding like Jersey rocker Glen Burtnik (Styx) in a song that mixes acoustic and electric in a fashion that borders on Rock and Americana without fully committing to either genre. Roger Daltrey is likely a tribute to the artist's father and is an incredibly human song; deep with emotion, thought and remembrance. Halligan ends with Carry Me Home; a wistful love song written across distance and time. The plaintive refrain becomes almost a chant, like the pure repetition of emotional need it represents.

Rob Halligan presents Best Thing That's Happened as a rock album. There are songs here that are Contemporary Christian Folk/Rock songs, and there's traditional Folk/Rock material that's secular at least on the surface, but an element of faith, hope and love pervades all of the songs on Best Thing That's Happened. This isn't canned pop music for an audience of worshippers, but deep and introspective singer/songwriter material from someone who lives a life guided by faith, and that guidance blends into his songs as much as the rest of what he might think about the world. In the end, Halligan has created a breath-taking collection of songs that deserves to be heard. Some of the material here would be eschewed by Pop/Rock radio because of the subject matter, but there's enough crossover appeal in both directions to make Halligan a big star.

You can learn more about Rob Halligan at www.myspace.com/robhalligan or http://www.robhalligan.co.uk/. You can purchase a copy of Best Thing That’s Happened at www.cdbaby.com/cd/robhalligan5.
Posted by Wildy at 5:20 AM

Fantastic album by a great guy. Every time I hear Rob singing, I know that this is one guy using his God given talent for the glory of God. Best thing that could happen is that we get many more such albums from Rob.