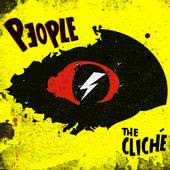 Have you ever listened to a band's CD and just known from the outset that they had fun making that record? That's the first impression I got listening to People's The Cliché. The Los Angeles band has been headlining top venues in LA and all along the west coast for the past two years and the buzz, which began as word of mouth rivulets, is set to explode. With production by Dave Jerden (Jane's Addiction, Alice In Chains, Mary's Danish) and Engineering by Bryan Carlstrom (Billy Idol, The Offspring), People took no chances with The Cliché; undoubtedly one of the most exciting Pop/Rock releases of the year thus far. Add to this the fact that The Cliché was bassist Gidget Gein's (Marilyn Manson) swan song and you have an EP full of great music, intrigue and not a little magic.

The Cliché opens with Song For The People, a danceable Rock song in the best 1980's tradition. Vocalist/guitarist Jimmy Young sounds like a cross between Escape Club's Trevor Steel and Corey Hart, alternately soaring and pouting through the vocal lines in a tradition with lineages in the heyday of Glam Rock. The EP's first single, The Kids, has already gotten some attention nationally for both the song and accompanying video. It's a sophisticated anthem of rebellion that smacks a bit too much of the album title, but is still enjoyable for all of that. Cheap Money plays with some tasty guitar riffs descended from Jimmy Page and takes on materialism and the culture of cities like Los Angeles. Young Luv is notable for the guitar work but the song itself didn't really make a big impression on me. The EP closes out with Tune In Turn On And Drop Out, a great Pop/Rock tune with real commercial bite. This may be the best song craft on the album and is a great closer.

People bring tremendous energy and a sense of fun to The Cliché, turning in a performance that's practically guaranteed to transform them from a regional powerhouse to a band with national name recognition. The only question is where they'll fit in a segmented media market where genres have become so insular and proprietary that few people even know what they mean anymore. People is an exciting band with a sound that's perfect for the stage, and an ability to craft big Rock songs with enough Pop sensibility to have labels lining up to speak with them. The Cliché is an incredible warning shot from People. If we're lucky, there will be more.

You can learn more about People at http://www.peoplerock.us/ or www.myspace.com/peoplerock. As of publication no on-line outlets could be found to purchase The Cliché, whether digital or traditional. Keep checking People’s MySpace page for availability.
Posted by Wildy at 6:06 AM