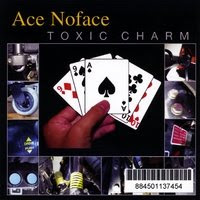 Ace NoFace - Toxic Charm
2009, Ace NoFace
Ace NoFace's story is inspirational. Diagnosed with Amyotrophic Lateral Sclerosis (ALS, also known as Lou Gehrig's Disease) in 2005, the Indie-Rock guitarist gave up music for 6 months until a musician friend urged him to use music to make sense of his struggles. Having to cope with learning how to write/play music differently now that he could no longer play guitar, Ace NoFace writes/plays his music with the help of computer software these days, but continues to write compelling and interesting songs. We reviewed Ace NoFace's self-titled Demo EP last year, but now he's back with his full-length debut, Toxic Charm.

Toxic Charm opens with Regret, a surreal inquisition that asks "have you done more harm than good?" There's an edgy quality to the song that saves it from itself. 2000 Bikes sounds like it tries to tread the piano-driven path of Ben Folds' solo material. The subject matter leaves me a bit lost, but the song is a present listen. Snakes also falls into the Ben Folds fold, although the roots can be traced much deeper (Billy Joel). Ace NoFace drops a few Pop references (Indiana Jones, Gary Kasparov, NASCAR) into a song about knowing your limits. The result is a good listen but the refrain is a bit surreal at times. The harmonies (all Noface) on this song are particularly strong, giving the song a signature character. Concept questions the existence of God in a fashion sure to offend anyone with a theistic belief system. The song loses any power to convey its message because of the trite and belittling tone of the lyrics. Mercy recounts Ace NoFace's struggle with disease and his impatience with God over not getting better. While these two songs are based in Noface's personal experiences, they just flat out lack the style or panache of XTC's Dear God.

Ace NoFace's Toxic Charm is aptly named. The highly blunt nature of the lyrics suggests that at least part of NoFace's intent is to keep listeners on edge. There is a distinctive and understandable anger to the lyrics on Toxic Charm that is relevant but overcomes any good will driven by Ace NoFace's back story. The musical arrangements are decent, but would benefit from the development a full band could give them. Toxic Charm looks to build on the promise of Ace NoFace's 2008 Demo EP but falls somewhat flat in the process of trying. Ace Noface would benefit greatly from collaboration.

You can learn more about Ace Noface at http://www.acenoface.com/. You can purchase a copy of Toxic Charm at www.cdbaby.com/cd/acenoface.