Review: Marcy Playground - Leaving Wonderland... In A Fit Of Rage 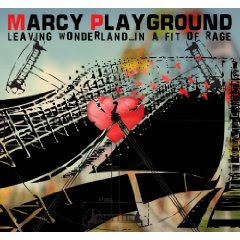 Rockers Marcy Playground return with their fourth album, Leaving Wonderland... In A Fit Of Rage, an artistic and sonic advance over 2004's Marcy Playground 3 (MP3). Marcy Playground broke into the US music scene in 1997 with megahit Sex and Candy, which drove their self-titled debut to sales of 1.7 million copies. Two ensuing albums, Shapeshifter (1999) and MP3 have proved to be creatively dynamic but haven't drawn a great deal of commercial attention. Leaving Wonderland is something of an anti-pop rock album; with Marcy Playground treading wherever they want, from the edgy pop of Gin and Money to the gentle singer/songwriter style of Irene.

Singer/guitarist/songwriter John Wozniak stretches boundaries on Leaving Wonderland, not that there was ever much in the way of boundaries to creating music for Marcy Playground. One of the reasons they might be considered "one hit wonders" in the US is that Marcy Playground has always refused to play the corporate rock game. Wozniak goes where the muse takes him, irrespective of what popular mores or record sales might say. The result is an artistically pure and interesting album. Leaving Wonderland opens with Blackbird, an edgy song steeped in spirituality and love. Devil Woman could be a modern re-working of Billy Joel's She's Always A Woman as it covers much of the same territory, although Devil Woman switches back and forth between speaking to the listener and speaking to the song's subject. Devil Woman is built around a slinky guitar lick that will hook listeners right from the get-go.

Gin And Money is perfect for radio distribution, a pop-based rocker with hints of Led Zeppelin in its musical lineage. I could hear Plant firing up this tune and taking it around the block a few times with no difficulty whatsoever. Star Baby is the potential breakout hit on Leaving Wonderland; an incredibly catchy tune that just won't quit once it wiggles its way into your ears. Irene has a folk-tune quality to it with hints of blues built in; the song deals with the inevitability of death in a fashion that's almost straightforward and very well-written. It's a goodbye to a loved one that has a great deal more depth than you might catch on the first listen. My favorite track on the disc is I Must Have Been Dreaming, which shows a wit that often gets obscured in Marcy Playground's songs. It's an ironic song about having the world (or aspects of it) as you know it turned on its head. It's another incredibly infectious song that could have some real potential commercial legs. Memphis shows off some serious finger-picking on guitar and plays up Wozniak's singer/songwriter tendencies on one of the best folk tunes I've heard this year. Be sure also to check out Thank You and Down The Drain, both excellent tracks.

Marcy Playground may just surprise some folks with Leaving Wonderland... In A Fit Of Rage. It's an incredibly smart record with a soul-searching quality to it. The music is as incredibly diverse and wide-ranging as we've come to expect from Marcy Playground, with Wozniak wandering all over the musical map in search of the perfect expression of his ideas. The record isn't quite the perfection he strives for, but it isn't far off the mark either. Leaving Wonderland... In A Fit Of Rage is a Wildy's World Certified Desert Island Disc. Don't miss this one, folks.

You can learn more about Marcy Playground at www.marcyplayground.com. Leaving Wonderland… In A Fit Of Rage is due for release July 7, 2009. You can pre-order copies through Amazon.com.
Posted by Wildy at 5:20 AM

I agree wholeheartedly with this review. Being a big Marcy Playground fan, this album does not disappoint. It's beautiful, catchy (but not annoyingly so), and thoughtful. I've already listened to it twice this morning :-) This album was definitely worth the wait!

LOVE Marcy Playground. I still pop the amazing "Shapeshifter" in the CD player at least once a month, but was a little let down by "MP3". It still had some great tracks on it, but got too cheesy for me in parts.

That said, "Leaving Wonderland" was RIGHT up my alley. Aside from that great feeling you get from hearing Woz's voice after such a long hiatus, the tracks range from good to FANTASTIC. "Star Baby" and "Emperor" are two of his best songs ever. There's really no filler on this sucker, it's all pretty solid.

It doesn't quite reach the genius of "Shapeshifter", but it's easily as good as their first effort and better than "MP3". Great stuff!