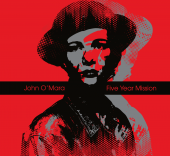 John O'Mara walked away from a tech job to start a five year mission to bring his mix of Alternative Rock and Eletro-New Wave to the world. Long a popular solo performer in Portland, Oregon, O'Mara got his first taste of electronic music as member of the duo Fuzzmonkey. O'Mara's debut album, Five Year Mission, brings an eclectic mix of sounds from the 1980's and today that have been compared to bands such as Joy Division, The Cure and The Talking Heads. Produced by Sean Flora (The Shins, Yeah Yeah Yeahs, Franz Ferdinand), Five Year Mission is likely to turn some heads.

O'Mara opens with Your Sister, an Electro-Folk musical decoupage that is difficult to follow. The track is not representative of the album as a whole and is probably not the best foot forward O'Mara could have selected, but it’s a decent listen. Amiss has a great mix of New Wave sound and Pop sensibility that made bands like The Cure and Talking Heads such behemoths in the 1980s. This is Pop songwriting that also has a future as a dance club hit. Happy Hour explores the dark side of that weekly celebration, in which happiness is a goal that's never achieved, and perhaps moves even further out of reach as the bridge of drinks grows longer. Happy Hour is perhaps the most traditional Pop/Rock/Alternative songwriting on the disc, reminding me a bit of Elvis Costello in the process.

Made Of Stone mixes upbeat dance sounds with the deep melancholy and pathos that characterized the 1980's new wave music that paved the way for Goth's birth, whereas The Broken Part reminded me a bit of some of Steven Page's darker work with Barenaked Ladies (i.e. Call And Answer). I Saw You is a breath of fresh air, an acoustic guitar based piece featuring the mesmerizing Morgan Grace in a duet with Latin roots. O'Mara has found his way back to the root of his muse here and the results are stunning. Satellite Radio has a David Bowie feel to it, right down to the vocal style, but isn't quite up to Bowie standards. Five Year Mission closes out with It Is Done, a mix of eclectic electric sounds, organic music and effects.

Five Year Mission proves one thing, John O'Mara was right to quit his day job. The album is very much based in the New Wave style of the 1980's but has enough current Alt-Rock buzz to make it an appealing hybrid of styles. This isn't necessarily an album that's going to do well on traditional radio, but college and internet stations will have a field day with John O'Mara, and the licensing deals can't be far behind. From a listener's standpoint, the album is an excellent find with a few bumps. O'Mara may still be figuring out where he's head musically, but he's definitely headed in a direction you'll want to follow.

You can learn more about John O’Mara at www.myspace.com/fuzzzmonkey, where you can purchase a copy of Five Year Mission.
Posted by Wildy at 5:00 AM