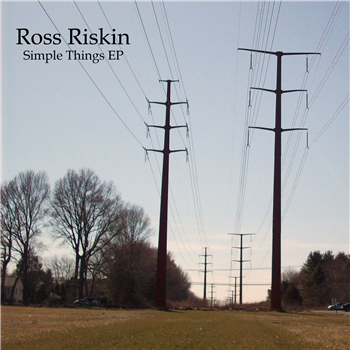 Ross Riskin is an 18-year old singer/songwriter from Orange, Connecticut with big aspirations. Recording his debut EP, Simple Things, in his bedroom, Riskin spent months trying out and recording material before selecting the five songs presented here. Riskin recorded direct to tape using his computer, improvising around mistakes instead of overdubbing, giving Simple Things a live feeling that's missing from a lot of recorded media. Riskin's recording process was as minimalist as his arrangements, working with two microphones, a computer and the natural acoustics of his room. The instrumentation here is guitar, voice and occasionally piano.

Simple Things opens with The City, a folk-style ballad that's akin to a musical watercolor, with Riskin painting a moment more than telling a story. The lyrical content here is a bit simplistic and forced, but the musical arrangement is quite pleasant. Break Me Down shows a bit more cogence in the lyrics, with Riskin taking satisfaction in quick pace of life. My Mind finds Riskin affecting a subtle British accent; that aside, My Mind is a great tune. Introspective and upbeat, Riskin has created a tune with real commercial potential without sounding commercial; a nice trick if you can do it. Without Sound borrows heavily from Dave Matthews in sound, but lyrically is unpolished and young sounding. Simple Things closes with Simple 37, seeking understanding and order of life, where truth is static but conditions are always changing. Once again, the perspective is a bit young but the core concepts are strong.

Simple Things cover material written over the last four years, and reflects the artistic growth in Riskin over that span. The EP is a bit jagged in flow as I am guessing the songs presented here are not in chronological order, and so you might go from polished, well-constructed song to young and sophomoric musical venture as easily as the other way around. Simple Things leaves me convinced that Ross Riskin has a future in music, and I would venture that Riskin will continue to grow and develop as a songwriter. Writing and playing with a band would flesh out Riskin's sound a bit while providing creative and artistic tension that would be likely to bring out the best in Riskin. Simple Things is a decent listen, but until he really challenges himself, we won't know what Riskin is ultimately capable of.

You can learn more about Ross Riskin at www.rossriskin.com or www.myspace.com/rossriskin. You can download a copy of the Simple Things EP from iTunes.
Posted by Wildy at 6:26 AM