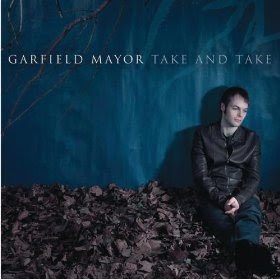 Coventry, England’s Garfield Mayor was the first signing for Rob Thomas’ new label (with Evan Lamberg of EMI Music Publishing), RTEL Records. Mayor portrays a neurotic sense of loss throughout Take And Take; all wrapped in light and airy pop music confections. The result is an interesting mix of light and dark that never really coalesces into something as powerful as it could be.

Take And Take opens with the title track, a slinky little rock song with dark undertones about greed and self-fulfillment at the expense of those around you. The arrangement is pleasing, with a tempo and cadence that will play well to commercial radio. Let Love Be Your Energy is an upbeat Pop/Dance tune that's perfect light fare for the dance club scene. The melody and arrangement are secondary to the dance beat here as Mayor provides a bit of mellow vocal tonic. The song itself is not particularly memorable, but efficient sugar water for the dance floor. The same might be said for Softly Softly (piano). New You sticks with the light Dance Pop aura Mayor has built around himself thus far, although the melody and arrangement are a bit more compelling here. New You is a decent pop song in its own right and would work well in an arrangement sans the dance beat.

Future Vs. History finds Mayor taking on a bit heavier sound in the intro as a tease before breaking into a light Pop confection with a serious side that never feels entirely genuine. Higher States gets a bit more of a Brit-Pop sound going on what is by far the best written tune on the disc. Mayor begins to make a serious case as a songwriter here, but returns to his lite Pop sensibility for the ballad When Stars Collide, which closes out Take And Take.

Take And Take is Reality TV pop music. It sounds good and plays well on introduction, but after a few songs you realize that the substance perhaps isn't what it first appeared. Mayor is a decent songwriter but doesn't really offer anything (with the exception of Future Vs. History) on Take And Take that motivates the listener to keep coming back. Mayor's voice is very pleasant in his upper register, but has a distinctive nasal quality in his chest voice that wears on the listener after a while. On balance, Take And Take is a decent listen, but not one you're likely to keep with you once the disc stops spinning.

You can learn more about Garfield Mayor at http://www.garfieldmayor.com/ or www.myspace.com/garfieldmayor. You can purchase downloads of the album at Amazon MP3 or iTunes. Physical CDs will be for sale at some point in the near future.
Posted by Wildy at 6:09 AM