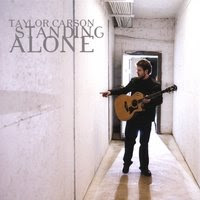 Arlington, Virginia’s Taylor Carson is another singer/songwriter in the Dave Matthews/John Mayer/Jack Johnson vein, a purveyor of bed sheet soul and folk. 2008 saw a breaking away of sorts for Carson, who after two albums with a full band decided to truly take the stage for himself on Standing Alone. The album is essentially just Carson and his guitar, and he makes the most of the opportunity by delivering highly emotive and personal songs in folk/rock arrangements for one.

Standing Alone opens with Fade Away, a wonderfully well-written song about the uselessness of dwelling in the past. Fade Away is intelligently conveyed in a gorgeous acoustic guitar arrangement. Fly bears out the fact that Carson has a bit more texture to his voice than the folks mentioned above, but the vocal style doesn't change much. Fly is a heartfelt ballad that doesn't fit to the typical Pop radio ballad form. Hips & Minds is a highly entertaining juxtaposition of the thinking and carnal aspects of human interaction and attraction. Carson is all out with his emotions on every song thus far on Standing Alone, proving the title to be more than just words.

Afraid stays with a highly emotive style with Carson going all-in on the emotionally wrenching vocal line in a song about loss. The arrangement works well, with Carson providing a rhythmically varied guitar background. Chances carries a positive message about reaching for your dreams and is probably the song on Standing Alone with the greatest licensing/commercial potential. Heavy (The Whiskey Song) is all about taking solace at the bottom of a bottle at the loss of a love. The idea is a bit cliché, but the song is well written, and Carson's raspy voice is the perfect tonic here. Taylor Carson hits a high on The Way You Walk Away, a sweet come-on song that has real commercial potential. The folk arrangement here is great, but with a full-band sound and the Pop/Rock side of this song fleshed out a bit more I could see this song taking radio by storm. The album closes out with Understand Why, an introspective song about love and the fear of crossing the bridges that come with it. Understand Why is a bit of mix-tape magic that will gain Carson a lot of fans.

Taylor Carson doesn't have a pretty voice, but it's an interesting voice that keeps you listening. The raspy textures of his vocal lines work with his emotive style to create a dramatic sense in even the slower songs presented on Standing Alone. The songwriting here is excellent, although I would like to hear what a full band would do with these songs. Taylor Carson has a real future here. Standing Alone is a great start.
Rating: 3.5 Stars (Out of 5)

You can learn more about Taylor Carson at http://www.taylorcarson.com/. You can purchase a copy of Standing Alone at www.cdbaby.com/carsontaylor.
Posted by Wildy at 5:00 AM