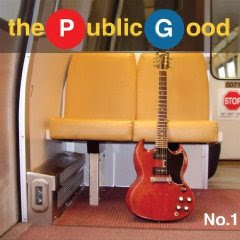 Washington, D.C.'s The Public Good may look and sound a bit familiar to fans of the 1990's Chapel Hill, North Carolina scene that produced acts such as Hootie & The Blowfish and Edwin McCain. Another band from that much-celebrated scene was The Popes, featuring songwriters John Elderkin and Steve Ruppenthal, who now form the nucleus of The Public Good. Their debut album, No. 1, will be released on August 1, 2009. Produced by Brian Paulson (Wilco, Beck, Squirrel Nut Zippers, Superchunk), No. 1 features real life through the lens of classic singer/songwriter storytelling infused with wit, emotion and not just a little bit of charm.

No. 1 opens with Baby, Baby, Baby, a bit three-chord guitar pop at its finest. It's a very catchy tune about a husband/dad feeling left out once the baby arrives. This is a great pop arrangement with some Beach Boys style harmonies in the breadkown. (Imagine The Girlfriends I'd Have) If I Still Had Hair is a humorous what if song from an vocalist who sounds like he could be a third-cousin of Paul McCartney. There is a distinctive melodic sense to the songwriting even if the songs themselves range from brilliant pop ditties to aggressively mundane attempts at wit. The Only Way is a decent track with hints of The Tragically Hip woven in. Other highlights include Cigarette and Nightmare.

The Public Good may well turn out to be aptly named. The presentation on No. 1 is very rough, musically. There is some real story telling potential in the songs presented here, but there is also an innate awkwardness in the lyrical structure that needs to be worked out. Songs like Baby, Baby, Baby highlight that potential. In the right hands this could be a bit pop hit. For now, The Public Good is off to a good start. No. 1 is more than sufficient to help build a fan base.

You can learn more about The Public Good at www.myspace.com/thepublicgood or http://www.thepublicgoodonline.com/, where you can purchase a copy of No. 1.
Posted by Wildy at 6:48 AM

I don't see how you can only give this 3 stars. This is really extraordinarily catchy and smart power pop. The wit and intelligence outdistances 98% of the stuff you hear even on indie radio.