Review: A Scribe Amidst The Lions - Sunken Cities 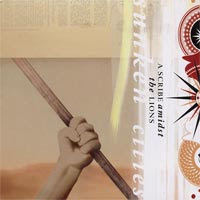 A Scribe Amidst The Lions - Sunken Cities
2008, Tubwater Music

San Diego’s A Scribe Admist The Lions takes Alternative Rock down harrowing and reward paths on Sunken Cities, their second album. Nominated for a 2008 San Diego Music Award as best alternative album; Sunken Cities explores the depths of experimental rock in occasionally discomfiting and generally rewarding dioramas of sound. Don’t expect to listen passively; you won’t get it unless you stay involved.

Sunken Cities opens with The Depth Commencing, a brief instrumental appetizer that leads into the explosive chaos of The Equator Swallowed The Boys. Imagine elements of Classic Rock and Melodic, Post-Punk Modern Rock wrapped into a highly compact yet ranging Rock N Roll experience and you'll get an idea of where A Scribe Admist The Lions starts out. Elements of Grunge come into play on Scripted Daydreams, which has a monotonous and less-than-elegant temperament. The vocal line reaches stratospheric heights in this song with notes that are pure imagination for most singers. A Scribe Amidst The Lions takes turns both Progressive and Psychedelic on songs like Wet Bird, Marble Czar and Light Sinks The Moon, balancing right on the edge of musical madness for much of the middle of the album. No Peace Found In Pieces continues the somewhat psychedelic aspect, but maintains a bit more constructive approach. After several listens I'd have to say that A Scribe Admist The Lions remind me most of Canadian rockers The Rheostatics but with less of a tendency to seek out the occasional bit of Pop sensibility. You'll want to make sure you seek out The Drift and Metropolyptika as well.

A Scribe Amidst The Lions is what you might call an acquired taste. Dark, urban soundscapes populated with psychedelic bordering on psychotic moments is the order of the day on Sunken Cities. This is an album that challenges the listener to dig deeper and find your own treasures. On balance, I can't say that I entirely enjoyed it, but Sunken Cities was an interesting experience. There are folks out there for whom this will click, starting with fans of The Rheostatics.

You can learn more about A Scribe Amidst The Lions at http://www.ascribeamidstthelions.com/ or www.myspace.com/ascribeamidstthelions. You can purchase a copy of Sunken City at www.cdbaby.com/cd/asatl2, or you can download the album from iTunes.
Posted by Wildy at 6:22 AM