Review: Shaky Foot - Down On The Rain 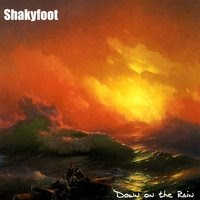 Everyone's been in a relationship that seemed like it should be right but the timing was all wrong. That's the story of Shaky Foot in a nutshell. Formed by Jason Scolnick (Lead vox, guitar) and Bob Gobron (bass, vocals) in the early 1990's, Shaky Foot fell apart after showing real promise. Reforming in 2006, Shaky Foot found a new drummer in Charlie Silva, and has gone on to become one of the most sought-after bands in the Boston Music Scene. Shaky Foot's newest disc, Down On The Rain features thirteen (13) tracks of blues-based rock that will be appreciated by fans of bands such as Jimi Hendrix, Eric Clapton and Stevie Ray Vaughan, to say the least.

Down On The Rain opens with Goodbye Mrs. Rose, featuring some excellent vocal harmonies and a dirty, driven blues feel you simply can't ignore. Bust It Out High is a bit more mundane than the title might lead you to believe but is still a good track. Down On The Rain is a deep and powerful song about seeing rays of hope even in your darkest moments. In this case the protagonist is a drug addict who has a moment of clarity and sees that things will be alright. The guitar work here is fabulous. Shaky Foot trod down a path frequented by The Beatles on In The Middle, blending in the occasional Jazz garish. This might have been the most enjoyable song on the disc if it weren't for the mixing which turns it into a messy but still listenable tune.

She's My Lady is a great listen perfect for last calls. The Blues/Rock arrangement here has perfect pop sensibilities, leading into the Led Zeppelin influenced Beat You To The Punch. Preacher Man is probably the best-written track on the CD, done in a slow build to an over-the-top climax that's probably even better live. Wake Up features the most interesting guitar work on the disc, particularly the opening riffs. You'll also want to make some time for Worried Mind, Young Jack and Zoom Baba Loom.

Listening to Shaky Foot makes me want to find a gig of theirs in a dark bar on a Saturday night with a few friends. The music here is pretty dynamic and enjoyable; Down On The Rain should really be experienced live. What sounds fun on CD would be a joyous cacophony of musical noise in a live environment. Shaky Foot is worth spending a little time with.

You can learn more about Shaky Foot at http://www.shakyfoot.com/ or www.myspace.com/shakyfoot. You can purchase a copy of Down On The Rain on CD or as a download at www.cdbaby.com/cd/shakyfoot2.
Posted by Wildy at 6:07 AM