Review: John Brodeur - Get Through 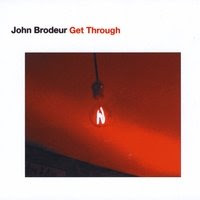 John Brodeur has been a fixture of the Albany, NY rock and pop scene since before his 2000 debut album, Tiger Pop, started getting serious notice from outlets such as Performing Songwriter, PopMatters.com and Indie-Music.com. While based these days in New York City, Brodeur has a laid-back writing approach wrapped around edgy melodies and deeply ensconced pop sensibility. Brodeur's latest album, Get Through, started out as a band project with his previous cohorts, The Suggestions. That band essentially fell away in the process of writing and Brodeur soldiered on with the help of Pete Donnelly (The Figgs, Candy Butchers) and Ryan Barnum (Strange Faces). The end result is Brodeur's most well-rounded effort to date.

Get Through opens with Make A Change, a positive song about taking the reins of your life and making things happen. Make A Change is upbeat without being over-the-top and has a great pop hook buried in the middle. I'm Bad is a big, fuzzy rock song built on a great melody, pleasing melodies and the self-story of a bad boyfriend. Wit and a self-deprecating charm are the heart and soul of I'm Bad, which has some real potential as a single. Brodeur slows things down a bit with Flame, a moody and almost mournful look at a friend who's out of control. Shades of Elvis Costello can be heard here.

Security suggests a sound that could take Brodeur a long way. There's a Classic Rock element here in the harmonies, and the Costello-esque songwriting is evident, but Brodeur just shines through his songs, even on CD. Security is a musical rocket that soars, and Brodeur just has a Je-ne-sais-quoi that makes you want to hit repeat again and again. Silence, Please takes on a relationship doomed by the emotional instability of both participants; each living in fear of upsetting the other and dooming themselves to eternal misery instead of setting each other free. Listeners may hear echoes of Ben Folds here with the strong piano presence in the arrangement and the neurotic, self-destructive relationship archetype, but Brodeur's creation is wonderfully unique and his own.

Fight dances around the roots of the Grunge sound propagated by Nirvana and deals with addiction in very blunt terms. Meltdown is a straight-up down-tempo rock tune that begs to be let loose into the Americana/Country arrangement it wants to be become. Hints of this appear, particularly in the guitar part, but Brodeur keeps things on the guitar side of the scale with passages and phrasing that almost suggest late-stage Beatles compositions. Love And Misery is a great rock tune, complete with compelling harmonies and a melody line that just won't quit. Of all the songs on Get Through, Love And Misery is the one I would pick for a lead single, and with the right break you'd be hearing it coast to coast all summer long. Get Through recalls Folds again, in a surreal and melancholic song about surviving. The album closes out with Home. Home is a dedication of sorts; with home not being a physical place but the person to whom he has cleaved. The arrangement is the most bare on the album (Brodeur and guitar) and is quite engaging. The song itself has a slightly neurotic sense driven by the narrator but is a great listen.
John Brodeur is one of those artists that you might not get on the first listen, but the more you listen the more drawn in you become. He's kind of like that kid from high school who seems a bit odd or stand-offish when you first meet him but then it quickly becomes apparent he's the most interesting kid in the class. Get Through is a wonderfully varied collection of songs that range through Rock, Grunge and Alternative styles without ever losing a distinctive pop appeal. Brodeur writes intelligently, conveying thoughts and stories in a personal style that make the listener feel a part of the show. He might take a listen or two to dig into, because his style isn't exactly the flavor of the month, but careful listening brings great rewards. Brodeur is capable of writing big Pop/Rock songs (see Love And Misery), but is more likely to be the sort of artist who builds a stellar catalog for a not-so-small and appreciative fan base over time. For now, Get Through is brilliant.

You can learn more about John Brodeur at www.johnbrodeur.com or www.myspace.com/johnbrodeur. You can purchase a copy of Get Through at www.cdbaby.com/cd/brodeur2, or you can download it from iTunes. Be on the lookout also for the debut from John Brodeur's new band, Maggie Mayday, due out in the Fall of 2009.
Posted by Wildy at 6:06 AM