Review: Jeremy & Rebecca - What We Leave Behind 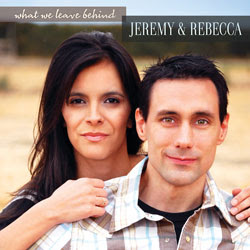 Jeremy & Rebecca - What We Leave Behind
2009, Dwelling Records

He's a marketing director. She's an Early Childhood Special Education Teacher. They're married and have a family. One could understand if Jeremy & Rebecca Hendrickson never quite had time for a music career, but this is no ordinary duo. Jeremy & Rebecca set out to write songs with positive themes and uplifting content/sounds; the same sort of appeal that went into old time variety shows and family movies. The sounds are updated for today, but the spirit is good old fashioned family entertainment. What We Leave Behind is a stunning album of feel good moments buoyed by Jeremy Hendrickson's solid songwriting and Rebecca Hendrickson's dazzling voice.

Jeremy & Rebecca created What We Leave Behind without financial backing from a label or anyone else, relying on Visa and MasterCard to see the album completed. Working from a wish-list of music veterans, Jeremy & Rebecca managed to put together a recording ensemble of folks who've previously worked with the likes of Eric Clapton, Mariah Carey, Faith Hill, John Mayer, Chicago, Mary J. Blige and Rascal Flatts. In much the same way that an independent film production can create a sense of magic among cast and crew, something special occurred in the process of recording What We Leave Behind. The sense of joy that flows off the CD is accompanied by a cohesion that goes beyond professional into personal.

What We Leave Behind opens with Fool, a rockin' country love song about getting caught up in love. Rebecca Hendrickson takes lead vocals here and quickly proves to be one of the most dynamic country vocalists I've heard in a while. With a sultry, powerful voice that can cross the lines from country to R&B while passing through Rock, Jazz and The Blues, Rebecca could sing the phone book and have folks lined up to listen. Flyer takes a left turn into the disco era with a song that could have topped the charts back in disco's heyday. Never ones to sit still, stylistically, the duo launches into What We Leave Behind, a down-tempo blues tune that introduces us to Jeremy's voice for the first time in a duet with Rebecca. Jeremy's voice is one of clear, pure tone with an honestly emotive sound. The positive message here is undeniably, born from any one of a number of religions or theologies, that immortality is achieved not through your own accomplishments but in how you make the world around you better.

Feels Like The Heavens is a love song that sounds like it could have been an R&B/Pop hit in the 1980's. Straight And Narrow plays on the edges of country and rock in a highly energetic and driven musical declaration that would play very well to country radio. There is a strong moral compass in the music presented here that's Judeo-Christian in nature. The music itself isn't religious per se, but there's a distinct philosophy or belief system that underlies the songwriting that's based in one. Made To Love You also reflects this distinct grounding in perhaps the most explicit terms on the album. Jeremy & Rebecca sing to each other from their hearts, and the sincerity is clear. This is major mix-tape material without the complicated blending of love and sexuality that pervades popular music.

Jeremy takes lead vocals on How I Love You in a tune that sounds like something Barry Manilow might have recorded in the 1970's. It's a sweet song and another mix-tape must. Miracle finds Jeremy & Rebecca bringing the funk on one of the best dance oriented songs on the disc. Tallest Tree is a sweet song written by Jeremy for his son; it's the earnest promise of a father to be the best he can for his son. The song is beautifully written pop that will touch both fathers and sons. Why Strive finds Rebecca hitting a 1970's vibe again in a song that, while not my favorite on the disc, is certainly sonically interesting. Rise And Shine is a theatrical pop tune with some serious guitar work dancing around the vocals. Rebecca provides a great deal of vocal color and sass on a song that moves from shadow to light and back several times. The album closes out with Have You Got The Time, a cabaret jazz style love song that is the perfect ending for a dynamic and changeable album.

What We Leave Behind is an unusual project, a melding on many varied and disparate pieces into a concept album unlike anything you're likely to hear these days. Jeremy & Rebecca seek to entertain with values-based music and themes; making music they would be perfectly comfortable with their children hearing. The goal is admirable, and I think it's safe to say it’s a smashing success. What We Leave Behind is bound to be a breakthrough album.
Rating: 4 Stars (Out of 5)

You can learn more about Jeremy & Rebecca at www.myspace.com/jeremyandrebecca or http://www.jeremyandrebecca.com/, where you can purchase a copy of What We Leave Behind using PayPal. The album can also be obtained at Amazon.com, or you can download the album through iTunes.
Posted by Wildy at 5:10 AM