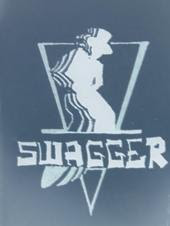 Raleigh, North Carolina’s Swagger takes the stage with their self-titled debut. Purveyors of Rock N Roll with its roots firmly planted in classic and southern rock, Swagger keeps things fresh with a modern edge, a sense of irrepressible energy and a vocalist with the charisma to lead a big time rock band. Swagger firmly believes that Rock N Roll exists to help you forget your troubles, and there’s nothing but a good time to be had on their CD.

Swagger opens with Running Wild, a guitar-driven rocker reminiscent of Billy Squier or The Black Crowes full of great hooks. Vocalist Dallas Perry (what a Rock N Roll name…) has a wonderfully dynamic Rock N Roll voice that will grab your attention.. Mourning Train hits all the right notes for fans of Southern Rock, and the guitar work is superb. Always Be Shining renews the comparisons to The Black Crowes on a strong rock love song. Roadrunner is the highlight of the album; it's not a song that I would expect much from on commercial radio but a definite concert staple. Swagger closes out with Bella, which can only be described as southern hillbilly rock. It's a great closer for Swagger, and a close second to Roadrunner for best song on the album. Also be certain to check out Susanne, Youngblood and She Is Love.
Swagger has it. Swagger hearkens back to a time when Rock N Roll was fun to play and fun to listen to. Swagger is an extremely solid debut album worth spending some time and money on.

You can learn more about Swagger at www.myspace.com/swaggernc. Swagger is available as a download through iTunes. If you want a physical CD, you can either attend a Swagger show or contact the band through their MySpace page.
Posted by Wildy at 5:00 AM