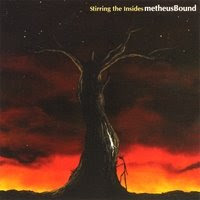 Toronto Indie Rock quartet Metheus Bound bring social conscience and an intellectual approach to songwriting to both stage and studio, as evidence by their debut album, 2008’s Stirring The Insides. With a title inspired by Zeus’ punishment of Prometheus for showing man how to use fire, Metheus Bound has more than a little to say about the power that the political and economic elite use against everyday people, and the power of art to hold back the night, as it were. Combine these high ideals with a melodic style drawing on influences from Jazz to Funk to Rock to lyric balladry, Metheus Bound will make you stop and listen.

Vocalist James Everett has a bit of crooner in his soul, and Metheus Bound has a highly refined, smooth jazz sound. Stirring The Insides opens with What’s Been Done, a vaguely funky jazz fusion piece at home in the late-1970s. Capture is melodic and smooth with a great vocal/harmony mix. Think For Yourself is very well written musically, but shows the ultimate paradox of political correctness, berating those who have chosen a philosophical, religious or political system based on consideration of positions for not thinking for themselves. Metheus Bound pulls in some great Chicago-style horns on songs like Stir and Life.

Jilt is one of my two favorite songs on the disc; sounding a bit like early Paul Simon stylistically. There’s a real minimalist bent here, and it marks a very human turn on the CD. Jilt is the ninth track on Stirring The Insides. Up until that point there is this highly smooth, jazz feel throughout the disc that is so slick and highly produced that it loses its human element. Jilt is a major turning point. Compassion For Pride is another benchmark song. This wonderfully dark and textured ballad with minimalist arrangement is the best song on the disc. Other highlights include Prince Afka, Ronda’s Turkish Prison and Stef’s Song.

Metheus Bound is very slick and professional on the jazz fusion material, but when James Everett breaks things down and lets his inner singer/songwriter come out the results are fabulous. The two sides battle for prominence on Stirring The Insides, with the fusion side having a highly marketable sound but lacking a real human element, whereas the singer/songwriter material is much more compelling. Stirring The Insides is an interesting listen.

You can learn more about Metheus Bound at http://www.metheusbound.ca/ or www.myspace.com/metheusbound. You can purchase a copy of Stirring The Insides at www.cdbaby.com/cd/metheusbound.
Posted by Wildy at 5:20 AM