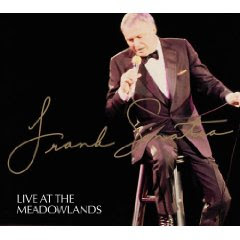 What can I say about Frank Sinatra that you haven’t heard before? The man is a legend, and still creates a buzz when a new release is on tap even eleven years after his passing. Sinatra was the recipient of no less than eleven Grammy Awards, including the Grammy Trustees Award, Grammy Legend Award and Grammy Lifetime Achievement Award. Sinatra also won an Academy Award for Best Supporting Actor (From Here To Eternity), and was awarded the Presidential Medal Of Freedom in 1985 by Ronald Reagan and the Congressional Gold Medal in 1997. Sinatra sold over 100 million records over the course of his career, in spite of a damaged ear drum and a voice that was imperfect. Sinatra’s gift was his ability to sell a song better than anyone else in the business. On May 5, 2009, Concord Records releases the jewel in the crown for any collector of Sinatra audio recordings, Live At The Meadowlands.

On March 14, 1986, Frank Sinatra took to the stage at The Meadowlands Sports Complex in East Rutherford, New Jersey, for a show that has become legend amongst Sinatra fans. The show was a homecoming of sorts for Sinatra, and has not been previously released officially, although poor quality bootlegs have circulated among fans for years. Listening to the recording you could tell that Sinatra, even at seventy years old, knew it was a special night. There was a bounce in his step that came through in the performance (there’s nothing like playing to a hometown crowd that loves you). Sinatra covered every phase of his career, from One For My Baby and It Was A Very Good Year to New York, New York. There’s even a three minute monologue segment that gives a very human look at Sinatra that is passed over in news and tabloid coverage of the man.

Special moments in the concert include The Gal That Got Away, I’ve Got You Under My Skin, Where Or When, Someone To Watch Over Me and Mack The Knife. Ultimately, when compared with some of the great singers of the past seventy years, Sinatra’s voice isn’t as pretty as some, but the man owned everything he sang like nobody’s business. It’s one thing to hear him on studio recordings, but on this live performance you get the full effect of Sinatra’s charisma and style. There’s nobody better, then or now. Anyone out there who performs on stage, or dreams of doing so, this is your first lesson in showmanship. You’ll never find a better teacher.

Live At The Meadowlands is a Wildy’s World Certified Desert Island Disc.

You can learn more about Frank Sinatra at http://www.sinatra.com/. Live At The Meadowlands hits shelves on May 5, 2009. You can purchase your copy at Amazon.com or wherever music is sold. You can also download the album through iTunes as of May 5.
Posted by Wildy at 7:12 AM