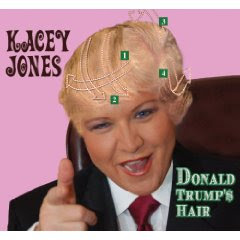 Kacey Jones came to prominence as lead singer and writer for the musical comedy act Ethel and The Shameless Hussies. Her roots in comedy and in music run equally deep and wide. Jones has developed a reputation as a top-notch writer and singer, even stepping into the booth to produce Kinky Friedman's Pearls In The Snow. Her voice has the culture and shading of an old time Lady of Song, and her penchant for humor has made her famous. For all of these reasons, I was very excited to see Kacey Jones' latest CD, Donald Trump's Hair, come across my desk.

On the music side, Jones doesn't disappoint, with 12 new songs and an inspired rendition of The Glory Of Love. The arrangement and musical performances here are flawless. Jones is also in fine voice throughout. Hers isn't a perfect voice, but it has a warm depth to it that wraps up a listener, and Jones has the charisma and charm to sell a song like few others in the business. The problem is that for an album that is classified primarily as a comedy disc, it just wasn't all that funny. Donald Trump's Hair opens with the title track, a cultural cliché that's been done one too many times even before this song arrived. There's just not a lot of humor in the subject to begin with, and Jones doesn't find anything new here. I Wanna Be Up Front Like Dolly is the lead single from the album, and again, covers a subject that's been a cultural talking point for 30-plus years.

I Can Always Get Skinny But You'll Never Be Tall is just humorously vindictive enough to get a few chuckles, and The Bigger The Better will score laughs with a few, but otherwise the audience response is likely to level off at polite applause. The Glory Of Love is inspired here, with Jones throwing herself into the song and delivering a rendition that will keep you glued to your seat. God Save The Queens is cute, but again falls short of the humor line.

I have to say that I was both disappointed and pleasantly surprised by Donald Trump's Hair. I sat down to listen expecting some good laughs, but they never came. What I did find is one of the best (primarily) country music productions of the year, to date. If top-notch country is your thing, then Donald Trump's Hair is something you need to check out. Just don't expect a lot of laughs.

You can learn more about Kacey Jones at http://www.kaceyjones.com/, www.myspace.com/kaceyjonesmusic or http://www.donaldtrumpshair.net/. You can purchase Donald Trump’s Hair at Jones’ web page, as well as on Amazon.com.
Posted by Wildy at 5:00 AM