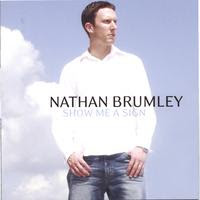 Whitebird, Idaho’s Nathan Brumley took the indirect route to his music career. Following college, Brumley took a job rebuilding hiking trails. While others were fueling their songwriting through the sort of self-possessed pain teens and early twenty-somethings expose themselves to, Brumley was living a life of serenity and hard work. He did something right. Five albums and several licensing deals later, Brumley lives to make music. Brumley’s songwriting has a strong Contemporary Christian slant, but also has the ADD-fueled Zeitgeist at times of Ben Folds. Today we’re talking about his 2005 release on Embassy Music, Show Me A Sign.

Opening with the title track, Brumley sets a deliciously dark tone for the album. Show Me A Sign has a distinct blues flavor in the verse that turns pure pop on the chorus. Breath Of My Soul is a piano-driven prayer in song that is a pleasant listen but doesn’t leave a strong impression. Offending Grace is offered in a wonderful pop arrangement built around a strong melody line and arching harmonies. This is the most sonically pleasing cut on the disc and should obtain significant presence on Christian Radio outlets with distinct potential for crossover to the pop realm. Brumley gets a little formulaic in on the second half of Show Me A Sign, with schmaltzy pop tune such as Love Outside The Lines, Only My Heart, Every Time See The Rain and How High. He returns to form however for the final track, Things You’ve Never Done, a piano-based prayer in song that is inspired.

Nathan Brumley has real songwriting talent. Contemporary Christian Music (CCM) fans will go ga-ga for Brumley, and his better material has enough pop bite to have real crossover potential. Show Me A Sign is a bit uneven, starting out with strong material but running out of steam about halfway through. The rest is decent, just not up to the level of the first four or five songs on the disc. Show Me A Sign is highly recommended for fans of CCM. Even if CCM isn’t your deal, there is some great pop songwriting here.
Rating: 3.5 Stars (Out of 5)

You can learn more about Nathan Brumley at www.myspace.com/nathanbrumleymusic. You can purchase a copy of Show Me A Sign at www.cdbaby.com/cd/nathanbrumley.
Posted by Wildy at 5:00 AM

Wow, there is a lot of worthwhile material above!