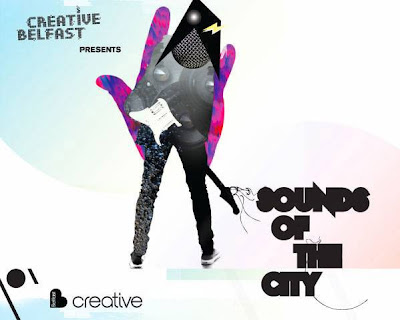 Belfast has something of a history for providing distinct musical talent to the world, with the most notable alumni of that city being the one and only Van Morrison and film composer David Holmes. Creative Belfast is a city-wide initiative to help promote the next generation of Belfast artists to the world. Their latest compilation, Sounds Of The City, collects fifteen of the most popular and/or most inspiring bands currently active on the Belfast scene onto one CD. Everything from country to Rock to Electronic/Dance music is represented here.

If the purpose of Sounds Of The City is give a stage to the wide array of talent in Belfast then it is a strong success. If the intent was to put the best foot forward of every band then the results are somewhat mixed. There's not a dud on the compilation, but some bands definitely made the most of their placement while others offered up decent but not highly memorable songs. The biggest find on the CD is Eilidh Petterson, with a sweet, pure voice and a lyrical acumen for capturing people, places and moments in song. Her original tune, Still Learning is particularly touching. Ben Glover has some name recognition outside of Ireland and gives the expected subtle and nuanced performance on Mercury Is Falling. Anthony Toner, like Eilidh Patterson, gives a performance that makes you want to go find his CD. Sailortown is a great story song and highlights his highly enjoyable voice perfectly.

Escape Act adds a highly listenable entry in the form of Cabin Fever. The song has a distinct pop sensibility that gets stuck in your head. Rock instrumental fans will want to check out ...And So I Watch You's Set Guitars To Kill for a little song with big Prog dream and a touch of Zappa spirit. Other highlights include Ken Haddock's Your Sonnet, Bap Kennedy's America, The Beat Poets' Staring Stars Down and General Fiasco's Rebel Get By.

It's very evident that Belfast has a thriving music scene. There are three artists on this CD (Eilidh Patterson, Ben Glover and Anthony Toner) who are clearly ready for the big time. Several other artists here show distinct promise. Of course the City of Belfast would love it if you came and stayed awhile to check out the local music scene, but most of us can't just do that. Instead, make sure to check out some of the folks immortalized on this collection. Sounds Of The City is a worthwhile venture, and sure to do collateral damage to your CD/download buying budget.

Be sure to check out the individual artists featured on Sounds Of The City on the World Wide Web. Or if you’re in Belfast, check them out in person.