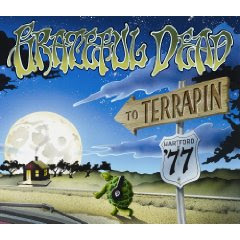 1977 may have been the musical apex of the Grateful Dead’s career. The world of music was being roiled around them with the emergence of punk and disco as popular forms, but the Dead were at the height of their collective powers coming off a 2-year touring hiatus and on the way to recording what may be their best album, Terrapin Station. On May 28, 1977, Grateful Dead took to the stage of Hartford Civic Center in Hartford, Connecticut. The entire show has been preserved and remastered in the form of To Terrapin: Hartford ’77, released in April of 2009 on Rhino Records

To Terrapin: Hartford ’77 features Jerry Garcia, Donna Jean Godchaux, Keith Godchaux, Mickey Hart, Bill Kreutzmann, Phil Lesh and Bob Weir. The band floated through classic such as Bertha, Sugaree (nearly 20 minutes worth), Jack Straw, One More Saturday Night and Playing In The Band. The real treat for the crowd were songs such as Estimated Prophet, Terrapin Station and Passenger, which would be released several weeks later on Terrapin Station. At 3-CDs and 21 songs this set is a bargain, and beats any existing bootleg for sound quality, as all tracks are up to HDCD standards. This is the perfect set for a hardcore Deadhead, and the ideal introduction to a band that holds a vaunted place in the history of rock music. To Terrapin: Hartford ’77 is highly recommended.

You can learn more about Grateful Dead at http://www.gratefuldead.com/. You can purchase To Terrapin: Hartford ’77 at Amazon.com or wherever music is sold. Downloads are available through iTunes.
Posted by Wildy at 4:55 AM

Pretty useful information, thank you for your article.