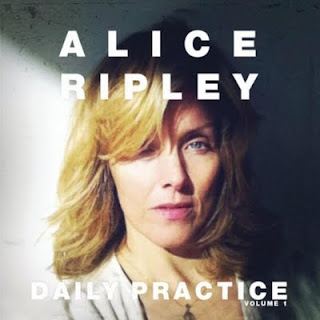 TONY winner Alice Ripley has been acting on and off Broadway for twenty years, as well as recording albums and gigging with her band Ripley and creating works on canvas and in mixed media.  As an artist whose creative energies seem to have no end, Ripley often uses one art form to balance off another.  So it was in 2009, when Ripley played conjoined twin Diana in Next To Normal.  Aside from earning Ripley a TONY for best actress in a musical as well as a Helen Hayes award, Next To Normal left Ripley with another legacy.  Each night Ripley would return to her hotel room and recover from the emotional weight of her performance by singing some of her favorite songs while accompanying herself on acoustic guitar.   These impromptu therapy sessions were memorialized on the album Daily Practice, Volume 1, released earlier this year on Sh-K-Boom Records.
Daily Practice, Volume 1 is raw and unvarnished, featuring Alice Ripley in an almost manic performance state.  The result is unsettling at times, striking at others, and throughout is underscored by the emotional complexities and beauties of the human condition.  Ripley opens with Carole King's "It's Too Late".  This is one of the mellower offerings on the album, but Ripley's vocal performance is impassioned and full of emotion.   "Message In A Bottle" is halting and uncertain at times.  While the original version by the Police seems to focus more on the hope for salvation, Ripley's version seems more focused on the desolation and hopelessness of the narrator's position.  The performance is striking and raw, delivered in the uncomfortable tones of someone who doesn't know what to do next.
"I Still Haven't Found What I'm Looking For" is played straight to the letter, but misses the soaring feel of the original in a workman-like performance.  Alanis Morissette's "You Oughta Know" is slowed down a bit, with Alice Ripley all over the place vocally.  Ripley seems to relish the emotional outbursts of the song, articulating representatives of the FCC's seven deadly words with particular fervor.  "Essence" (Lucinda Williams) displays a particular vulnerability; the emotional charge in Ripley's voice is palpable and real.
Ripley goes all out for Bruce Springsteen's "Thunder Road", capturing the gritty honesty of Springsteen's writing style perfectly.  The sense of hope and joy amidst a dreary world is compelling.  Nanci Griffith's "The Flyer" drips with the loneliness of the road, staying true to the original.  Ripley takes on The Eagles' "Take It Easy" in halting fashion.  It's a solid cover, but doesn't have the carefree feel of the original.  Ripley takes a fair shot at R.E.M.'s "Everybody Hurts", but sounds overwrought.  The whiney, self-involved nature of the song and the heaviness of Ripley's voice just don't make for a great mix.  Ripley closes on sound footing with a solid cover of Carly Simon's "Anticipation".
Cover albums are always fraught with difficulties for fans and critics alike, but Daily Practice, Volume 1 is not your typical cover album.  The ten songs collected here represent a daily process of catharsis that allowed Ripley to maintain her balance during one of the most trying roles of her career.  The unvarnished nature of the album will give some listeners pause.  This is Alice Ripley, warts and all.  Most artists would never have the audacity to release recording in such a raw state.  From a purely aesthetic standpoint, Daily Practice, Volume 1is raw and unsettling.  Put into perspective, it becomes a statement of freedom, and of that particular beauty that grows from human imperfection and perseverance.  Daily Practice, Volume 1 comes straight from the heart.
Rating: 3.5 Stars (Out of 5)
Alice Ripley's web presence is fleeting and hard to find.  Her blog, aliceripleylinkup.blogspot.com has not been updated in a while, but you can pick up some good information about her there.  The site for her band, Ripley, www.myspace.com/ripleytheband has also not been updated in a while.  Luckily, Daily Practice, Volume 1 is available from Amazon.com as a CD or Download

C'mon, man, you're entitled to your opinion, but a little fact checking wouldn't hurt, ay? Diana was not a conjoined twin; that was Violet, a role Alice Ripley played over a decade ago in SIDE SHOW. And I don't think she lived in a hotel while starring in Next to Normal on Broadway, either. And as I think you know at this point, Ripley has an active Web presence, with current accounts on Twitter and Facebook.In fact, if she's conjoined to anything at this point, it's probably her iPhone. (Ooh, that was a bad joke, but I'm leaving it, because I can't think of any other way to end this post.)

Facts Are Your Friend said...

No disrespect intended, but it's quite ridiculous to attempt to review a person without taking a moment to learn facts. Making the mistake of saying she's playing Diana the conjoined twin would be funny if the error wasn't so startling. Also, I can't think of someone with more of an active Web presence than Alice Ripley. So, this post is essentially just wrong.

Anyway, I'm too stuck on the factual inaccuracies to even start to argue that Daily Practice actually deserves TEN out of five stars... but it does... just saying.

Thank you for the great comments, folks! Reviewing as I do, I generally rely on the press release that accompanies the album when submitted. If press releases are less than factual, or present a more interesting backstory than might otherwise be attributed, well... that's showbiz folks. If you care to update the facts in the comments section, then feel free. As for the web presence, when I see websites that haven't been updated in quite some time, it gives the appearance of being a less than active presence. Fair enough.

So thank you for your opinions, and the updates on the facts of the case. Above all, enjoy the album and keep reading. We need a few gadflys around here.