Owen Pye - The Truth About Man 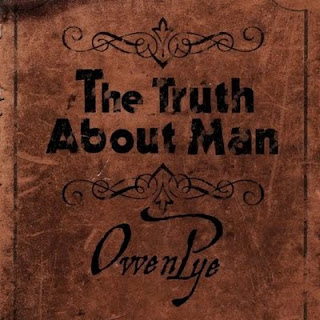 Owen Pye - The Truth About Man
2011, Blackroom Records
Owen Pye's intellectual-emotional approach to songwriting calls to mind the likes of Connor Oberst and Sufjan Stevens.  Pye's experimentations are within his own mind; explorations of complicated questions, simple truths and the often willy-nilly paths that lead us from one to the other.  Pye's third album, The Truth Man, is something of a folk/rock opera about the journey to faith in Christian terms.  Often mired in introspective in melancholy, Pye tells his own tale of faith lost and found, written from the depths of experience and imperfection.  This is not the sort of music you're likely to hear on Contemporary Christian radio; Pye doesn't proselytize or try to convince anyone of anything.  He simply tells his own story in imagery both bright and obscure.
Pye opens with the vibrant rocker "Keep On Sinning".  The guitar-driven number ruminates on man's tendency to recognize their own inequities while continuing on down the slippery slope.  "Barriers" is a maudlin tune about standards and the sort of compromises we make with the world around us.  The bright melody line is nearly a contrast to the angst-filled arrangement.  Pye's tautological musings in "I Must Exist" are partly spiritual and partly the raging of his weaker side trying to survive.  "The Part" is an introspective and melancholy exhortation of a father whom he perceives as having failed to live up to expectations.  Whether this is an earthly or heavenly father isn't entirely clear, but on context either conversation could apply here.
"Freewill" takes on one of the more difficult concepts of Christian faith in very personal terms.  Pye rails against that which he doesn't understand, the dichotomy of using free will to give up your own.  It's interesting to watch Pye work his way through the argument before declaring an uncomfortable truce.  "Pharisee Of The State" is an intriguing number claiming a parallel between those who refused to recognize Jesus as the Son of God and himself as a non-believer as one and the same.  This song is a personal realization of the juxtaposition of heart and mind that occurs in the transformation of faith.  Pye explores the leap on "If I Give My Soul", a sort of negotiation with himself that leads to conviction.  Pye finds his truth in "Aches And Pains", marking his conviction with the recognition that faith does not solve all ills.
Introspective, melancholy and occasionally gritty are terms you might use to describe Owen Pye's songwriting.  The Truth About Man is stunning in its complexity and beauty; ascribing an almost Springsteen-esque worldview to the struggle for faith.   Even if Pye's beliefs aren't your cup of tea, The Truth About Man will surprise you with its honest portrayal of the struggle between one man's appetites and ego and his soul.  The Kafka-esque transition between struggling man looking downward and struggling man looking upward is resolute in its beauty and simple in its means.  This is a hard album to put down.
Rating: 4 Stars (Out of 5)
Learn more about Owen Pye at www.owenpye.com or www.myspace.com/owenpye.  The Truth About Man is available digitally from Amazon.com and iTunes.  If you need the album on CD, you can get it directly from Pye via BigCartel.

Excellent description of "The Truth About Man" and Owen Pye. Thanks for writing this insightful review, helping people who don't know Owen learn more about the man and his music.
If Owen's in your area, make an effort to see him.