Review: Savio Rego - All I Want 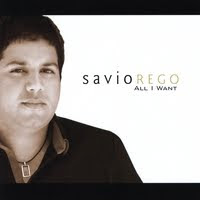 Born in Bombay, India and raised in San Jose, California, Savio Rego knows a thing or two about the blending of cultures. Rego taught himself to play guitar at the tender age of 13, picking out the notes of Guns N Roses' Patience; just as he saw no boundaries in learning guitar; Rego knows no limits to his avenues of musical expression. Incorporating elements Jazz, Latin, Blues, Folk, Electronica and Trance into a charming pop framework is Rego's vibe, and he appears to have found something special on his latest album, All I Want. All I Want has been available on MySpace for about four months as of this writing and has already sold over 2,000 copies on word of mouth alone.

All I Want opens with Senorita, a Latin Jazz flavored piece of Folk/Pop featuring Rego's smooth vocals. Sung in both English and Spanish, it's a modern urban mix-tape must. The melody here is intriguing, but it's the guitar work that will get you on this one; Rego builds a stellar minimalist arrangement around a strong melody line and creates a bit of magic. On Be Mine, Rego comes across as sort of a Latin Dave Matthews; once again aiming for the mix tape stratosphere on a dreamy love song that will melt hearts. Rego sticks with the minimalist aesthetic he advanced on the opening track, highlighting his guitar skills and voice simultaneously. Miss You is a musical monologue spoken (or sung) to a loved one who is away from home. The musical structure doesn't change but there's a distinctive melancholy that comes through Miss You. This is the sort of song that Casey Kasem started his Long Distance Dedications for.

Muse gets a bit repetitive, reflecting a relentless desire. At times it sounds as if Rego is talking about a hypothetical woman, and at others he could be talking about the theoretical Muse. It's never 100% clear in the song. One issue that seems to be developing over the course of the album is a marked homogeneity in sound. Rego rarely varies from the sound, style or dynamic that he established with the first track. This makes for a very consistent sound across the disc but may also lead to a perception that all of his songs sound the same. Ditto Jamaican Queen, another minimalist acoustic-guitar based tune in that same soft dynamic. There's no discernable Latin feel here, but the Folk/Jazz elements are here to one degree or another.

By the time we get to Chai Time Rego himself must be tiring of the sound, as he engages an electric guitar with looped beats and synth to mix things up just a bit. The result is a New Age/Jazz styled instrumental you might here in a subtly lit coffee house or a doctor's office. It's a decent listen in terms of relaxation but doesn't display a great deal of originality or direction. Rego heads for the Blues on Moving On, the best all-around track on the disc. Rego's vocal dynamics still haven't changed, but there's more energy and vitality to this song than on anything that came before. Rego winds down with Love Me For Me (Solo), a song that sounds like it should be a standard. The vocal sound has been consistent throughout, and Rego returns home to the sound the carried him through most of the album for the closing track.

All I Want is a solid album, with a solid, consistent series of performances from Savio Rego. This is an album that may lose its luster with listeners after a while because the sound is so consistent throughout that if you're not listening carefully you may confuse on track for another. Rego is a talent, to be sure, but he would benefit distinctly from collaboration. All I Want is simply too monochromatic to retain deep interest. There are no nooks and crannies to dig into.

You can learn more about Savio Rego at http://www.saviorego.com/ or www.myspace.com/savioregomusic. You can purchase All I Want as either a CD or download at www.cdbaby.com/cd/saviorego2.
Posted by Wildy at 5:00 AM