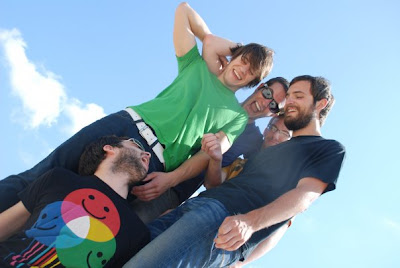 From time to time a brand new band comes along and throws you a curve. The Spotted Atrocious are a quintet from West Chester, Pennsylvania with a mostly acoustic sound and a stark level of honesty in their songwriting that goes beyond the norm. Capable of noisy, garage sounds or gorgeous Folk-ballad styled songs full of pathos, The Spotted Atrocious surprise you as a whole, and sometimes song to song. Composition is shared by all five members of Spotted Atrocious, with vocalist Ryan Warfield providing the lyrics and rhythm guitar. Liam Tinney takes lead guitar duties, with Mark Mullen on keys and synth; Mitchell Way on Bass and percussion and Chris Hall on skins. Their self-titled debut CD, The Spotted Atrocious, really makes a statement.

The Spotted Atrocious opens with Temporary Fix, a mid-tempo acoustic rocker about a guy prone to one night stands. It's all about the thrill of the chase here, but once he's got her he's off again. This is all done in an arrangement vaguely reminiscent of 1950's Rock N Roll. It's very catchy and well done. Blow It Out Your A$$ takes on articles of faith such as sin, damnation and salvation and calls them into question based on a rationality that's never explained. It's a sentiment that's been expressed many times over in the history of philosophy and religion, but the writer assumes you know his line of thought and doesn't explain. Instead he simply lays out the things he doesn't believe. This is all done in a slogging arrangement that turns progressive once the lyrics dry up. Philosophy and music do mix quite well, but a diatribe has no effect without reason. Simply citing rationality without explanation doesn't cut it.

A Beast Most Ferocious is a bit all over the map, following a similar musical path as Blow It. Once the lyrics run out there's a musical change-over from the sparse undercurrent of arrangement, although in this case it's not as divergent. Drop Off is a Folk/Punk Acoustic Pop song with Celtic influences; it's by far the best songwriting on the disc. Great hooks, a peppy arrangement and a melody that sticks in your noggin like oatmeal on your ribs. Drop Off is out and out a great Pop song. I Left The Earth Three Times is a disturbing Folk song; full of imagery that moves from vaguely bizarre to outright horrific. All of that aside, it's very well written. The horror here is in something of shock value. There's reference to a dream, and imagery that might hearken back to 9/11 or just an eerie similarity. The vocal harmonies here are lush and gorgeous (approaching Beach Boys standards), standing in aesthetic contrast to the imagery.

The Spotted Atrocious are a breath of fresh air. Stripping all the glamour and accoutrements away from popular music is second nature for these guys; going with musical gut checks written in sparse and sometimes lovely acoustic arrangements. The Spotted Atrocious is a great debut, announcing to the world, "Here we are! Deal with it." in the nicest of terms. There's something special here, and it's not fully revealed on the EP, but you get glimpses of it. It'll be worth sticking around to see what comes next.
Rating: 3.5 Stars (Out of 5)

This band is so talented and they have a comradery that makes them different from others. Love the!

I just snagged a copy of this cd recently @ the Trash Bar in NYC, where they played. Its a great cd! Just wish it was longer! Hope they come back soon.