Review: Isaac James - Too Much Horsepower 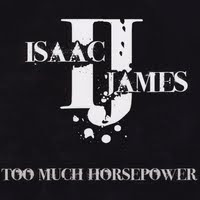 Isaac James still believe in Rock N Roll, mixing Classic and Modern Rock with deliberate elements of the Grunge movement to create a vibrant and forward thinking sound with distinct roots in the past. James's debut CD, Too Much Horsepower [EP] was recorded in the Spring of 2009 and has already garnered James attention from media and record labels.

Too Much Horsepower opens with Hey, sounding like a cross between the Sammy Hagar of Van Halen and Soundgarden. James is a capable vocalist and guitarist, and his backing band is as tight as can be. Hey is ready for Modern Rock radio (the question is whether Modern Rock Radio is ready for James). James slows things down a tad on Reckless to mourn the loss of a connection and yearns to know whether the person on the other side of that divide feels the same. The chorus is steeped in angst and repressed anger, borne out in the detached yet rocking guitar wall that girds it. Think Twice carries a big rock stick and harkens back to the hair metal of the 1980's, but doesn't quite come up to the level of the rest of the material here. James shows a slower, bluesy side on Satisfied. This is classic hard rock balladeering; a required component of any big Rock album of the 1980's Glam/hair movement, and James fits the part perfectly here.

Too Much Horsepower is a strong first effort from Isaac James. There is a definite talent for writing that is in the process of growing here. How far it goes it mostly up to James. Too Much Horsepower has two songs ready for primetime and two that aren't quite there, but it's a great start.

You can learn more about Isaac James at http://www.isaacjamesband.com/. You can purchase Too Much Horsepower as either a CD or download through CDBaby.com.
Posted by Wildy at 5:00 AM