Review: Alejandra O'Leary - Nothing Out Loud 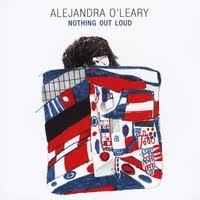 Alejandra O’Leary doesn’t sit still. Born on a small island off the Southern Coast of Maine, O’Leary worked her way all the way to Yale, forming two original rock bands (The Tourettes And The Masses) while studying English and Spanish literature. Moving to New York City in 2006, O’Leary immersed herself in the local music scene. On September 1, 2009, O’Leary released her debut album, Nothing Out Loud. Between the time O’Leary recorded the album and the release date she picked up and moved to Ann Arbor Michigan, but continues to tour consistently.
Nothing Out Loud opens with Ever After, a kiss off song to a one-sided relationship done in solid Pop/Rock terms. The song is decent enough, and O'Leary presents with a vocal style reminiscent of 1950's girl pop. There's enough vibrato in her voice to make it sound like she's eternally on the verge of going out of key, although it never quite happens. The effect is a bit disturbing until you get used to it. Tremor is an upbeat, piano and drum driven track with a dance beat and a simple arrangement that allows for a highly homogenized acoustic dance tune to develop. The pitch alarm finally goes off here, with O'Leary's breath control giving away on the longer passages at times. O'Leary slows things down significantly on the Folky December.
Moving somewhat into her higher vocal range, O'Leary appears to have a better relationship with the key she's singing in. Lyrically, the song is a bit simplistic but conveys her thoughts, ideas and emotions clearly. Rally comes back to the 1950's pop feel, urging a former flame to try again. It's a well-written pop tune with a catchy beat and a melody that you can sing along to.
O'Leary stays fairly steady across Powerhouse, I Love Your Tone and You Gotta Love Me Sometimes; all songs that are decent but don't really stick with the listener. There's a very young sense to O'Leary lyrically, like she has big emotional expressions to make here but hasn't quite developed the words to say all that's in her head. Thinkin' Straight hits the nail on the head by keeping things simple. It's not artful or elegant but does present a straight up look at what's going on inside in a sweet love song that's part cliché and part confession. Nothing Out Loud closes out with People Like Me, perhaps the best songwriting on the disc. There's an honesty and edge here that O'Leary seems to nail after trying to get there for much of the album.
This is one of those albums and reviews where I have my misgivings. I am not 100% sure if I just didn't get the point or if O'Leary never really made it clearly. Either way, Nothing Out Loud is something of a musical mess, but a good mess if you understand my meaning. O'Leary has a strong Pop sensibility built into her Alt-Folk presentation. She seems like she's still growing into her own as a songwriter, but the seeds of success are definitely here. Nothing Out Loud doesn't shine like it might, but it promises good things for the future.
Rating: 3 Stars (Out of 5)

You can learn more about Alejandra O’Leary at www.myspace.com/alejandraoleary. You can purchase Nothing Out Loud as either a CD or download on CDBaby.com.
Posted by Wildy at 5:00 AM