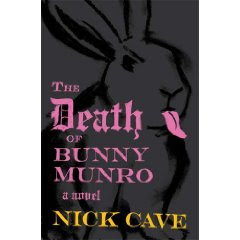 Nick Cave has been singer, songwriter and spiritual leader for The Birthday Party, The Bad Seeds and Grinderman; one wonders why he would even feel the need to write novels. It turns out he's actually pretty good at it. His first book, And The Ass Saw An Angel, debuted in 1989 to rave critical reviews. The Australian-born resident of Brighton returns 20 years later with his sophomore effort, The Death Of Bunny Munro. Bunny Munro is a post-modern Willie Loman with the self-destructive tendencies of Holden Caufield and the hubris of Charlie Harper (Charlie Sheen, Two and a Half Men).

We meet Munro in the midst of his life's work, ripping innocence and self-respect from the female beauty product-buying populace of England with his magnetic eyes and arrogant swagger. Munro goes through ladies trousers like a pig through slop. Munro, however, is on the precipice of a stunning fall from grace. His wife clinically depressed and tired of Bunny’s Philandering, commits suicide in gruesomely deliberate fashion, making it very clear in the process why. Bunny instantly becomes primary caretaker of his son, Bunny Jr., and the great swoon is on. Bunny Munro has always had a predilection for drugs and alcohol, but his consumption increases in direct proportion to the decline of Munro’s judgment and control. He begins to lose his savoir-faire with the ladies and his place in the world. To further it all, it becomes readily apparent that Munro is so immersed himself that he is utterly incapable of taking care of Bunny Jr.

Bunny takes his son on the road to show him the ropes of selling, which for Bunny Jr. amounts to sitting in the family car and waiting for Dad to score and then score. This works well for Bunny until his dead wife starts dropping in on his extra-curricular sessions, as well as showing herself and then visiting Bunny Jr. Hanging over all of this is Bunny’s Dad, ill with terminal cancer and as mean as a junk yard dog on a hunger strike. If you’ve followed all of this thus far, you’ll understand that The Death of Bunny Munro is a mess; A glorious, hilarious mess. Nick Cave has constructed a character so cartoonish he has to be real, and his story-telling style is more like he’s telling you over a beer than writing it down for you to read later.

In the end Munro is a character you hate to like, but there’s a simpering humanity to the man that catches your sympathy. You realize that Munro is, more than anything else, a product of his upbringing. The cancer that is killing his old man isn’t nearly as powerful as the social one he passed on to this son. Bunny Jr. there’s still hope for, and perhaps that is the reason for all of this to occur. Either way, The Death Of Bunny Munro an entertaining story that won’t play well on the Oprah book list but would probably make a wonderful short miniseries for HBO or Cinemax. Nick Cave scores again!

You can learn more about Nick Cave and The Death of Bunny Munro at http://www.thedeathofbunnymunro.com/ or http://www.nick-cave.com/. You can purchase The Death Of Bunny Munro from Amazon.com as a hardcover, an audiobook CD read by Cave or as an audio download.
Posted by Wildy at 5:20 AM