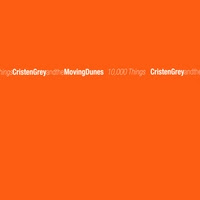 How does one go from the lead guitarist of a heavy metal band to a singer/songwriter/purveyor of edgy Adult Contemporary anthems and ballads? When you're New Mexico native Cristen Grey you realize all things are possible. The former guitarist for All Eyes spent time on the road opening for acts such as Quiet Riot and Cinderella, but always returned home for a dose of peace and quiet. In 2007, Grey struck out on her own, writing edgy and energetic adult pop with a knack for melody and a dusky alto voice that draws listeners in. Her new band, The Moving Dunes, is a perfect complement for Grey's edgy appeal, softening the edges and blurring the hard lines and leaving behind a cohesive group that is greater than the sum of its parts. The recorded fruition of this union is 10,000 Things, the debut album from Cristen Grey And The Moving Dunes.

10,000 Things opens with So Much Better, a cascading Pop/Rock tune that celebrates the joy in finding that special someone and the perspective that can bring. So Much Better won Best Rock-Adult Contemporary Song at the 2008 New Mexico Music Awards for Grey and has strong commercial potential. Rock Bottom has a classic rock song feel; this is one of those rare tunes that transcends genre and rises above simple monikers such as Rock or Adult-Contemporary. Grey is a fabulous songwriter and Rock Bottom is a turn of genius. It's not overly complex; just a near-perfect Pop song. I Want The World draws on Grey's days as a heavy metal rockergrrrl, incorporating some guitar work with big crunch and interspersing with a Rolling Stones style breakdown. This one is more a treat for the ears than anything else.

Out Of Control is another pure Pop song with a Rock edge. Originally licensed for the Independent short film Bloodline, Out Of Control would have real chart potential with the right break. Grey's best overall vocal performance comes next on Bad Emotion (nominated for Best Mainstream Rock Song at the 2009 New Mexico Music Awards). The feel here is sort of an Ann Wilson meets Pat Benetar dynamic with some serious guitar work involved. Grey's other award winning song, Absolute (Best Rock-Adult Contemporary Song, 2007) is a halting gem that creates a sonic pun in contrast with its title. This melancholic ballad might be the most commercially viable tune on the disc (and there are several that qualify). I wouldn't be surprised to hear another artist pick this up and make a hit out of it down the road if Grey doesn't do so herself.

Now You Know has an anthemic feel to it, with a chorus that soars in muted tones and gorgeous vocal harmonies. Sonically this is my favorite song on the disc; a blues-tinged power ballad that's not far behind Absolute for best on the album status. You'll Believe is another song on the disc with hit potential written all over it. There's a definite Heart-like quality to the tune and Grey pours her all into the vocal line for a stellar performance. Grey shows a Country/Bluegrass side on Stir Up A Swarm, highlighting the power of misdirected words. The surprising show of versatility cements the album and artist's status as essential. Sticking with the southwest/country theme, Grey launches into the closing number, God Drove By In A Big Limousine. This musical bit of whimsy is about as entertaining as they come, inviting you to get up and dance and remember that it's all in fun.

As a reviewer it's hard to not have some kind of notion about an album when you pop it in to listen. There's cover art or a press release or buzz you've heard about the band that informs your listening experience. Sometimes this is a good thing, and sometimes not so much. I try to keep these pre-conceived ideas out of the review process, and for the most part it works. I have to admit, however, that when I popped in 10,000 Things I was expecting a whole lot. Former metal guitarist performing Adult-Contemporary music. Hmmmm. Much to my surprise, Christen Grey And The Moving Dunes turn in a dynamite performance on 10,000 Things. The band is incredible and deserve credit for helping Grey refine her talents, but the songwriting and distinctive voice and personality of Cristen Grey drive this project from start to finish. Grey is a talent; one of those individuals who could likely thrive in any genre she made the effort at. As a songwriter she has a gift for melody, rhythm and the turning of phrases. As a vocalist she has a smoky sound that waltzes the border between sultry, refined and earthy; occasionally dancing into one territory or another but never giving itself away. Make sure you take the time to get to know Cristen Grey And The Moving Dunes. You won't regret it.

You can learn more about Cristen Grey And The Moving Dunes at http://www.cristengrey.com/ or www.myspace.com/cristengreyandthemovingdunes. You can purchase 10,000 Things as either a CD or download from CDBaby.com.
Posted by Wildy at 5:20 AM