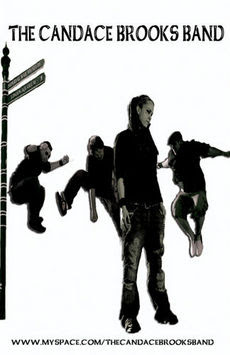 The Candace Brooks Band is a Providence, Rhode Island quartet the blends 1990's Alt-Rock with an edge worthy of today and a Pop sensibility that's universal across generations and genres. Following up on the success of their 2007 EP, Life After Me, The Candace Books Band returns with their first full-length album, The Chase. The Candace Brooks Band won numerous accolades for Life After Me in Providence, even placing second in a Boston battles of the bands, but with The Chase looks to open themselves up to a much wider audience. The self-produced album shows influences such as Tegan & Sara, Blondie and Franz Ferdinand but stays on the high side of original with a sound that's a breath of fresh air in the stale Alt-Rock genre.

If you like to dance you're going to love The Candace Brooks Band. The band loves songs that make people dance, feeding off the energy of the crowd to push their stage show ever higher. Brooks displays the utmost confidence on the opening track, I'm Gonna Break Your Heart; a musical acknowledgement of fact more than a threat. Brooks' rough hewn voice is the perfect rocker girl touch, the ultimate accent that sounds like a cross between Jewel and Debbie Harry. Reign Of Heart grabs hold of the listener in the ultimate courtship song, mixing elements of lyric rock with a heavy guitar chorus that isn't metal but wants to be. Feel It will get you on your feet, between the delirious bass line, danceable beat and cane sugar vocal line you'll be moved to move.

Whatever You Want (For Right Now) puts a serious edge on things, catching the energy of early Blondie in a risque tune that will play particularly well live. The rhythms here are right off a Ramones record, practically, and not dancing is not an option. Reckless follows up on a somewhat bland note; not a bad song but just not having the oomph of the rest of the record. The Chase ends with Gone Missing, a song mourning the slow decline of a relationship and recalling the days when things were different. Brooks sounds her most committed on this tune, and the band is as tight as always.

The thrill of The Chase is something that doesn't fully materialize for The Candance Brooks Band. The material is mostly strong, the band is excellent, and Brooks is entertaining, but for a band with such a reputation for their live shows, that energy just doesn't translate to CD as well as it might. Brooks sounds like she's been held back at times; her voice suggests she can really let go when she wants to, but it doesn't happen here. There's a danceable energy in the music but it doesn't always carry over to the vocal line. There are probably several production decisions that lead to this outcome, but it doesn't do Brooks or the rest of the band justice. I recommend the disc, but recommend catching them live even more.

You can learn more about The Candance Brooks Band at http://www.thecandancebrooksband.com/ or www.myspace.com/thecandacebrooksband. You can purchase The Chase directly from the band's web store.
Posted by Wildy at 5:05 AM