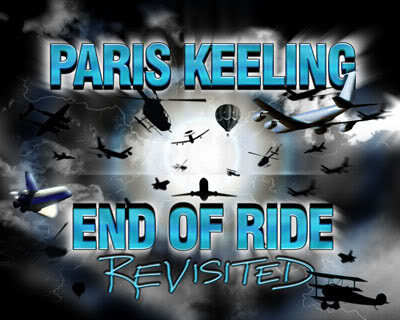 Paris-Keeling - End Of Ride Revisited
2009, Surgeland Records
Paris-Keeling has been around the block a time or two, both together and individually. Vocalist Kelly Keeling started out as the lead vocalist of Baton Rouge back in 1990, signing to Atlantic Records and releasing two albums. Later working with Alice Cooper on Hey Stoopid, Keeling co-wrote Snakebit with Cooper. He's also spent time in studio or on the road with Don Dokken, Roger Daltrey, Carime Appice, Yngwie Malmsteen and Michael Schenker, among others. Guitarist Marty Paris is (somewhat obviously) a co-founder of Paris-Keeling, and also helped start the Independent musicians group in New Jersey known as the Skulls Project. Bassist Rick Van Benschoten is an award-winning engineer and sound designer who's worked with the likes of Celine Dion, Amy Grant and Madonna. Cellist Matt Goeke walks in both the pop and classical worlds, playing with everyone from Church Of Betty and Voltaire to Musica Sacra and the Stamford Symphony. Drummer Gintas Janusonis has gigs with Carlos Santana, Erykah Badu, Angelique Kidjo and Tony Bennett on his resume. Suffice it to say the band is talented. Surgeland Records recently released End Of Ride Revisited, the latest offering from Paris-Keeling. Featuring guest appearances by Don Dokken, Carmine Appice, George Lynch, Shane Gaalaas, Erik Norlander and Al Pitrelli, it's an explosive album from a band we never seem to hear quite enough from.

End Of Ride Revisited opens with Tears Of Heaven, wrapped in crunchy guitar, arena rock vocal triads and a pointed vocal about the evils of war. This is a great bit of ear candy for classic rock fans with Don Dokken sitting in, but has enough commercial sense to find a niche even today. Head Straight is a live recording that gives you a good idea of how the band sounds in concert; it's a decent sound that's right at home in an arena. Free is a poignant musical moment, built on piano and some gorgeous instrumentation wrapped around Paris' dynamic vocal line. End Of Ride (Suite) sounds like David Coverdale or some other icon of 80's glam rock singing with the Beatles. The structure and composition is pure Fab Four, but the iconic flair of the 1980's is overpowering. This is a great tune that stretches the stylistic boundaries in unexpected and welcome directions.

Morning Song is a bit befuddling. It could be a love song or a prayer, and it's never made entirely clear throughout. It's a lovely song, with orchestration and a melody that will stick with you. These Days is a tuneful rocker that features some blistering guitar work from Dokken axeman George Lynch. These Days has a swaying quality to it that makes it stand out, but Lynch provides an unbelievable solo here that absolutely makes the song. I've Found is a gorgeously arranged celebration of finding that special someone. The Beatles-style evident earlier on End Of Ride Revisited rears its head again here in a song with harmonies that are to die for. Don't Disturb The Occupants is a rollicking good bit of Rock N Roll; a let-it-all hang out tune perfect for a live show. This is most fun Paris-Keeling has on the entire disc based on the sound and energy and features Carmine Appice on drums. Telephone Line, written by legendary musician, producer and ELO front man Jeff Lynne, is perhaps the biggest highlight of the disc. Keeling works magic on the vocal line, and the arrangement/instrumentation is perfect. Paris-Keeling says goodnight with Alive, celebrating the things that really matter, regardless of the whims of day-to-day life. It's a grateful song for all that has come and for still being here to enjoy it all.

I have to say I was surprised by End Of Ride Revisited. I'd never heard the original End Of Ride, but was expecting a straight classic rock album from Paris Keeling. What they delivered is much more textured and nuanced than your typical 1980's Rock band experience. Paris-Keeling a true song smiths, writing in a sound that is undervalued at times for its quotient of significant, lasting songwriting. End Of Ride Revisited has a couple of holes here and there, but as a listening experience it transcends expectations and delivers a sound and style that crosses generations, boundaries and demographics in the way that most modern rock bands never even imagine much less produce. This is great stuff!

You can learn more about Paris-Keeling at www.myspace.com/pariskeeling or http://www.pariskeeling.com/, where you can order a copy of End Of Ride Revisited.
Posted by Wildy at 5:38 AM