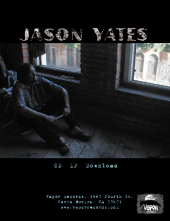 Jason Yates – Jason Yates
2009, Vapor Records
Jason Yates is one of the most respected Hammond B3 players in the business, having played with folks such as Mazzy Star (Fade Into You); Natalie Merchant (Tigerlilly Tour), the 2 PC and Macy Gray. His keyboard skills are undeniable, yet it's always interesting to see how a top-notch instrumentalist transitions to the front-man role either of a band or as a solo singer/songwriter. Yates made that jump with Angeleno, and returns on October 6, 2009 with his self-titled disc, Jason Yates.

Jason Yates opens with My Way Out, a piano-driven rocker that harkens back to an older sound; part Rod Stewart and part Elton John with a bit of Ben Folds added in for seasoning is an apt description of the sound here. You won't be able to resist the desire to pop and sway. Nobody So Far continues in a similar vein, embracing a 1970's singer/songwriter aesthetic with a melancholy (think Wallflowers) look at failed expectations. Yates has an everyman quality to his vocals that puts the listener immediately at ease, and the gentle arrangement is the perfect fit. Paper Tents finds Yates engaging in a comfortable bit of Americana with ties back into the late-1960's, early 1970's Folk/Rock scene. It's a pleasant listen.

I Run is a somnolent little tune with a melancholy air and a decent melody. Written either from the depths of depression or the bounds of sleep, I Run flows slowly like a mountain. To Chance has the same sort of classic sway to it heard on My Way Out. It's a song of regret about a relationship that didn't end up where Yates might have hoped. The arrangement is solid has an instantly likeable quality to it. Expect this to be a concert favorite. Sing For You closes out Jason Yates on a familiar sleepy note; a love song for the lovelorn and weary.
The tempo and affect on Jason Yates was a bit much for my taste in the end. As slow and relentless as a river, Yates pours out the waterlogged contents of his heart in songs that rarely vary in approach, sound or style. What's charming at two or three songs becomes wearisome well before the ninth and final song concludes the cycle. Jason Yates might be the theoretical love child of Leonard Cohen and Hope Sandoval, or perhaps he's just a guy who writes sad songs; either way he'll find fans, but you really have to be in the right frame of mind for this one.

You can learn more about Jason Yates at www.myspace.com/jasonyatesofficial. Jason Yates will be released on October 6, 2009; you can pre-order a copy through Amazon.com.
Posted by Wildy at 5:05 AM