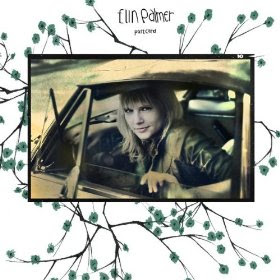 Denver singer/songwriter Elin Palmer has been around the block of the music business a time or two. The Värmland, Sweden native has played in session or in the road with or in support numerous artists over the years, working with acts such as 16 Horsepower, M. Ward, The Fray, Munly And The Lee Lewis Harlots, Devotchka and Eric Bachman (Archers Of Loaf) among others. Palmer is a multi-instrumentalist with a heavenly voice and mischievous glint in her eye, all of which manage to come across on her solo debut album, Postcard. With an expected release date of October 23, 2009, there’s a lot of hipster buzz about Postcard. Let's check it out.

Palmer is noted as a “longtime hipster crush”. Not ever having been much of a hipster, I can’t tell you what that’s all about. What I can tell you is that as an instrumentalist, Palmer is extremely talented. As a vocalist, she has a quality that is just short of mesmerizing, depending on where in her range she is singing. The title track, Postcard, sounds like Tori Amos, Milla Jovovich and Kate Bush all got together and somehow combined their voices into one superwoman vocalist. The song isn’t bad either; it’s a busy- yet-powerful and emotional song with an old-world Europe feel. Paint didn’t grab me quite so strongly; it’s dark and a bit repetitive and fell a little flat. Stora Stoular captures some of that near-mesmerizing quality that Palmer possesses. The song is sung in Swedish, so I can’t even begin to tell you what it’s about, but the melody is gorgeous and there’s a cabaret feel to it that simply works. Balloons is a song about emotional connections (or the lack thereof). An average to above-average song is made better here by some lovely vocal harmonies. Duvardar is the best composition on the disc, hands down. The song borders on being too busy, but is carried by its sense of vibrant life and positive energy; not to mention a melody you can hang your hat on. Palmer closes out Postcard with Whaleboat, a sea chanty that seems to draw a bit from the Celtic tradition, although this one is dark and a bit listless. It’s actually an intriguing listen, but not my favorite song on the disc by any means.

Postcard is tough to call. There are some great moments here and some so-so ones. On the whole I think it’s a win for Elin Palmer and her fans. I don’t think there are really any bad songs here, but it doesn’t necessarily sound like she was planning to write an album; more likely just a collection of songs she’s written over time and likes for various reasons. There isn’t a good flow to the album. Nonetheless the songwriting is generally strong, and he voice is as intriguing as most anyone in popular music. Make sure you check out Postcard, and maybe send one to a friend.

You can learn more about Elin Palmer at http://www.elinmusik.com/ or www.myspace.com/elinpalmer. Postcard will be released on CD on October 23, 2009. If you can’t wait that long and don’t mind renting your music, you can pick up the downloads at Amazon.com.
Posted by Wildy at 5:32 AM