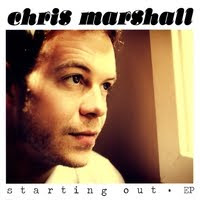 
Philosopher, teacher, singer/songwriter... the twine that separates these careers is thinner than you might imagine. To prove the point, Chris Marshall bridges all three and then some. The Portland, Oregon native was born on 8/8/1981 at 8:18 AM weighing 8 lbs., 8oz., and seems to have strode something of a serendipitous path ever since. Marshall discovered his mom's acoustic guitar as a teenager and never looked back, devouring genres like Punk, Hardcore and Emo as well the classic Country and Gospel of Willie Nelson and Johnny Cash. Marshall further developed his skills playing in his father's church (and continues to serve as a church music director to this day). Marshall has two prior EPs under his belt, mixing originals with gospel tunes, but his latest release, Starting Out [EP], is five original tunes without overt spiritual ruminations. Marshall remains deeply philosophical nevertheless, searching for the meaning of life in song as influences such as Soren Kierkegaard, C.S. Lewis and Walt Whitman color and shade his lyrical style.


Starting Out opens with Atlanta, a song inspired by a road trip Marshall took with his brother from Nashville to see the Atlanta Braves play. It's a gorgeously layered country tune, full of mournful pedal steel and a hopeful exuberance about the possibilities that lay ahead. Starting Out is a song about finding out who you are and what your purpose is. It's highly introspective and yet has a universal quality that should ring true with many listeners. The country arrangement here is a perfect fit, and some of the turns of phrase ("it's my soul's morning now") are superb. By The Wayside, a song written about a friend's drug addiction, is full of compassion and sorrow and plays simultaneously like an expression of concern and hope as well as a memorial for the way things were. Wait There is fairly self-explanatory, and drags a bit compared to the rest of the material on Starting Out but is a decent song. I Found You, on the other hand, is a sublime entry on any mix-tape list. Written in the vein of classic country love songs of the 1960's, Starting Out has a universal quality that would play well even on the jaded venue of modern Country Radio.


Chris Marshall brings an intelligent and warm approach to writing Country Music that is a hallmark of its history but too little emphasized today. Starting Out isn't his debut recording, but it's a coming out of sorts for an artist with the potential to not only be popular but also lasting and significant. The philosophical bent of his writing may escape some, but the principles on which his writing is based are universal. Love, hope, struggle and learning (including pain and sorrow) are the currency in which Marshall trades, all with the purpose of understanding the world around him. His questions are ones we all ask, and his songs are gentle comfort to those who continue to seek and struggle from day-to-day. Starting Out should be the beginning of big things.


You can learn more about Chris Marshall at www.myspace.com/chrismarshallmusic. You can purchase Starting Out as either a CD or download through CDBaby.com.
Posted by Wildy at 5:33 AM