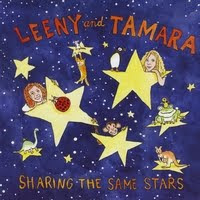 Leeny And Tamara are Ilene “Leeny” Altman and Tamara Hey. Altman is based in Gloucester, Massachussets and is an award-winning children’s artist. Hey is a New York City based singer-songwriter with three albums under her belt and a great deal of respect from critics and fans in NYC. The duo met as students at Boston’s Berklee School Of Music; their first professional collaboration, Sharing The Same Stars (September 1, 2009) is intelligent and catchy children’s music that will appeal to adults as well as children.

Sharing The Same Stars opens with Put On My Seatbelt, a piece of classic 1950's style Rock N Roll that teaches kids about the importance of wearing their seatbelts. The music is very entertaining and danceable, although the lyrics are a bit of a stretch at times and are obviously aimed at a slightly older crowd of kids. Taking Turns is highly listenable (and danceable) Rock N Roll, but again has a vague lyrical awkwardness that seems jarring in contrast to the musical arrangement. The two sides work better on I Used To Be Shy, a story song with a moral about being yourself. Where the first two songs come off as vaguely patronizing, I Used To Be Shy seems to come from the heart and therefore flows much more easily. Hold It will be a chuckle for the parents and perhaps a positive post-potty training reinforcement for the kiddos.

Ladybug, Ladybug, Ladybu-U-ug is entertaining, informational and forward thinking. I learned more about Ladybugs from this song than I ever knew before, and there's even a focus on preservation and Green thinking in the song. The arrangement itself is upbeat and fun and likely to engage children of all ages. My Baby is more for the moms listening along; a sentimental call for the growing up process, even time itself, to slow down. It's a gorgeous ballad written from the heart and is very touching. Your Epidermis Is Showing continues with the highly informational and highly entertaining tunes. Your kids will dance while learning all about their skin (keeps the outside out and the inside in!). It's Cool To Be You is a self-image builder done in a gentle rock arrangement that's a bit cliché in modern Pop children's psychology but has a positive message that's worth hearing.

Vitamin C is again highly informational and entertaining. The only downside to this, and many of the songs on Sharing The Same Stars, is that the music is definitely not aimed at younger kids. The words and concepts presented in many of the songs are so far over the heads of toddlers that it might not connect. The songs are catchy enough to garner interest from the young ones, but anyone not at least of school age might be left behind (which cuts out a large part of the market for a children's album). I Came Out Backwards is an amusing tune that shows how getting off the wrong foot can have long-lasting consequences, and is done as a cabaret tune with a Latin rhythm. This might be the best songwriting on the disc, although it would be considered a novelty tune if done for adults. Leeny and Tamara close out the set with Across The USA, an answer to Johnny Cash's I've Been Everywhere done for children. The tune is infectious and will have both parents and kiddos dancing.

Leeny And Tamara hit mostly the right notes on Sharing The Same Stars. A few instances of lyrical awkwardness early on are forgotten by the end of the CD. The intellectual level of the listeners is bit older than on your typical children's album, covering some words and ideas that will be fully lost on the younger set. Musically and vocally the album earns no complaints. A mix of musical styles and tempos will keep kids and parents involved. I suspect a live performance would be highly entertaining. I'd say Sharing The Same Stars is most appropriate for kids in the 4-7 range, although you might get caught up in the "that's not cool" phenomenon with the school age kids because the music's actually educational. Sharing The Same Stars is a strong album, it just might have a really narrow demographic.
Rating: 3.5 Stars (Out of 5)