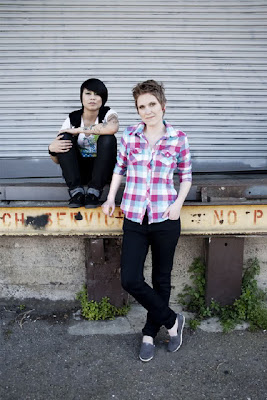 San Francisco Alt-Folk/Pop duo Camp Out met while sleeping though classes at UC Berkeley. Maddy Hanks (Vox, guitar, programming) and Jackie Law (drums, drum machine, synth, backing vox) recorded their first project, Camp Out EP, in Law’s garage with substandard equipment. After playing shows locally and building a following on the net, the two went to work with producer Shaw Waters to craft a full length album. The result is Closer, which has a quirky pop sensibility that surfs their Lo-Fi aesthetic.

Camp Out lets loose with Car Crash, a song about how good people stay in bad relationships. It's nerdy, Lo-Fi Rockergirl material that will play well on College Radio with the potential to cross over. Camp Out has captured a highly infectious hook here in a pleasing arrangement, and Maddy Hanks' clear, unadorned voice makes it all click. The album, Closer, in general, is all about the relationship process: Meeting, getting to know someone, falling in love (or something like it), when to take the next step, wanting out and recovering. This is all written from the perspective of someone who seems to imply she's not good at the relationship thing.

Camp Out is the most commercial track here, followed closely by Bones, which is very catchy and details the insecurities that come on once a relationship gets serious and someone starts feeling a little hemmed in. Small Steps is the best song on the disc; the first sign of maturity and vulnerability in the entire process. Realize that Camp Out has an anti-poet aesthetic going, so much of the material here is written in every day language, and occasionally veers into the wholly mundane lyrically. The album, in general is uneven, with some very strong songs and some that just really don't work all that well. Camp Out also gets points for one of the most unusual analogies in Pop Music in the song Swordfish. I'll leave it to you to go find out.

Camp Out has a decent start with Closer, a solid album that fits in somewhere between The Breeders and Belly sonically. There's a distinct Lo-Fi Pop sensibility that rears its head here and there on Closer. It's not a drop dead amazing album, but a solid listen that will find its way to your ears from time to time.

You can learn more about Camp Out at www.myspace.com/campoutmusic. You can download Closer through Camp Out's MySpace page. No other online outlets noted.
Posted by Wildy at 5:00 AM