Why I love the Beatles, and why I won't be buying the box set. 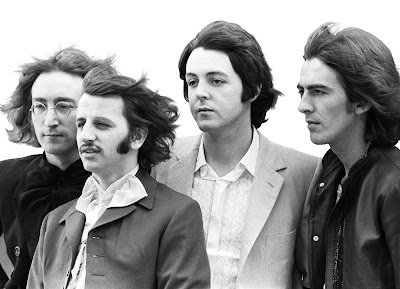 When I four or five years old, my Aunt gave me a gift certificate from Record Town (now known as FYE). Record Town still sold primarily vinyl albums back then (1975 or 1976), but also sold cassettes. My parents took me to the store thinking to find something for me and asked what would be a good album for a little kid like me. The clerk there at the time recommend The Beatles Yellow Submarine. We took it home and I hated it. It was tossed unceremoniously in a cardboard box and forgotten for eight or nine years.
When I was thirteen I was bitten by the Rock N Roll bug. I was on a church choir retreat (where flashing the female head chorister and the playing of kissing games all occurred) and was introduced to three albums by a guy named Aaron Richmond. The first was a comedy album by Eddie Murphy entitled Comedian. To a thirteen year old kid the F-Bomb is just about the funniest thing in the world. But more degradation at the hands of the Episcopal Church aside, Aaron also let me hear The Police's Synchronicity and Styx' Kilroy Was Here. My life-long fan-hood of Styx was born, as was my lifelong fan-hood of Sting and the Police. Perhaps more importantly, these introductions opened my ears to a wider world of music than I'd paid attention to before. (Up until then I had listened to Yankees baseball and Adirondack Red Wings Hockey, and when I couldn't find that I'd listen to Bill Miller on WGY out of Albany, NY.
Not long afterward I came across the Yellow Submarine cassette bought so many years before, dusted it off and popped it into my GE Cassette player. Even in tinny mono I was floored. What the heck were they doing? This was amazing stuff! It wasn't long before I found a copy of Abbey Road and simply devoured that. The Beatles haven't always been an integral part of my musical life, but they've always been there somewhere, from bopping along to Sgt. Pepper's Lonely Hearts Club Band on trips to Choral Competitions in Montreal to singing a solo of Yesterday in 10th Grade to the way they keep popping up at odd times at significant points in my life. The Beatles wrote music that was silly, essential and nearly timeless (and occasionally quite weird: Number nine, anyone?)
If you are young enough to not really know the Beatles you probably can't read this yet, but if I'm talking to you, go find out where most of today's edgy music originated. There isn't an artist in mainstream rock who isn't either directly influenced by the Beatles or isn't influenced by someone who is. Today, September 9, 2009, Capitol/EMI releases remastered versions of all the Beatles Albums, culminating in two box sets (Stereo and Mono). The box sets are pricey and out of the price range of most people in difficult economic times. Still, there will be a strong contingent of Beatles fans who will lay their money down, particularly for the Mono box set, which is a limited edition.
Each individual album is also available in a remastered edition. This is the first time these albums have been re-mastered since the late 1980's when they were first carried over to CD. (I believe remasters were done in the mid-90's, but I don't count those as the technology wasn't radically different and there is little or no sound difference.
I personally won't be buying them. I have five Beatles albums currently, and am sentimental about the ones I have. The sonic difference between the old and new editions won't make that much difference to me because I don't have good enough equipment to make a difference at this point (and I can't afford them anyway!). It would be fun, though, to unwrap the mono box set and hear the songs as The Beatles originally wanted them heard. I have provided links below to all the releases out today if you're interested, using Amazon.com as the destination. Be sure to check around for price variations (particularly on the box sets). I suspect these will be hot sellers this holiday season.
If you'd like to learn more about the Beatles, check out http://www.thebeatles.com/.
Out today:
The Beatles: Rock Band
The Beatles: Rock Band (Limited Edition Bundle)
The Beatles Stereo Box Set
The Beatles Mono Box Set
Revolver
Help!
The White Album
Sgt. Pepper's Lonely Hearts Club Band
With The Beatles
Past Masters
Abbey Road
Rubber Soul
Beatles For Sale
Let It Be
A Hard Day's Night
Magical Mystery Tour
Please Please Me
Yellow Submarine