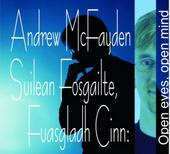 Cape Breton Island, Nova Scotia has long been home to a community of Scots immigrants and their descendants who have managed in spite of time and technology to hold on to many of the old ways, customs and stories. Indeed, it's been said that in some ways the residents of Cape Breton are more Scot than the current residents of The Old Sod. The Elders of the Scots community of Cape Breton are moving slowly into the twilight, and the younger generations move on as they always do, but luckily there are still folks like Andrew McFayden striving to keep the music, culture and language alive. McFayden lives in Prince George, British Columbia and has a Masters Degree with a thesis about reviving Scottish Gaelic in Cape Breton Island. McFayden has been performing professionally since 2003 and has toured through several Canadian provinces, performing at events such as the Prince George Gathering Of The Clans. McFayden also teaches Gaelic as well as serving in an advisory capacity on several boards relating to the subject. In 2007, McFayden released his second album, Suilean Fosgailte, Fuasgladh Vinn (Open Eyes, Open Mind) as a follow-up to 2004's An Rathad Cam 'S An Rathad Direach (The Crooked Road And The Straight Road). The album and resulting concert performances have won rave reviews, and we were lucky enough for Mr. McFayden to send us a copy for consideration. Keep in mind that I do not speak Gaelic, so my impressions are primarily of the music and sounds

McFayden lays out a tapestry of songs that plays something like a family tree of Scots Gaelic musical traditions. Most of these tunes are performed in much the way they are still performed in Cape Breton (and in some cases in Scotland itself). Open Eyes, Open Mind starts off with the a Cappella An Teid Thu Leam A'Righinn Og, calling to mind a fond reverie with a clear voice. McFayden revisits this song with full instrumentation later on in an indescribable act of beauty. The bagpipe that closes the song out will send chills down your spine. A Fagail Ceap Breatnan is all about leaving home; full of sorrow and loss and hope to return home once again. This tune was done with sparse instrumentation but may be more stark done a Cappella.

A Fhleasgaich An Fhuilt Chraobhaich Chai finds McFayden sounding like a true troubadour. The tune is done up in a modern folk or even light rock arrangement that somehow manages to not eclipse the antiquarian feel of the song. McFayden introduces a kitchen party-style group sing on E Ho Ro Mo Mhaighdinn Lurach. The moment created is palpable you'll find yourself wishing for a cup of Grog and singing along. The Oatfield Weaver Set is a personal favorite; a piano arrangement with a bit of swing to it to support a lilting vocal line. Violin adds its voice to the mix to create a vibrant sound.

McFayden turns modern on Mo Ghaolsa Mairi, buttressing a gorgeous vocal line with a piano and percussion arrangement very comfortable for the current commercial World Music environment. Bu Deonach Leam Tilleadh has one of those melodies that will haunt your thoughts for a number of days set in a light acoustic rock arrangement built primarily from piano and percussion. To Mom/Assuming Of Course is a sweet and melodic piano piece that serves as respite before the final push. Chi Mi Bhuam seems to practically grow out of To Mom... and plays like a sweet and gentle lullaby. McFayden closes out with the martial Mo Thruaigh Leir Thu 'Ille Bhuidhe. This group-sing with percussion stirs thoughts of William Wallace and all those who fought to give Scotland her freedom; and all those who've fought to keep their traditions alive west of the Atlantic. And not to worry; for those looking for traditional Jigs and Reels, look no further than The Gonzaga Set.

Andrew McFayden is in rarefied territory. Mary Jane LaMond briefly popularized Gaelic back in the 1990's, singing on Ashley MacIsaac's Sleepy Maggie, but for McFayden it's more like a mission than mere performance. While he counts modern Celtic bands amidst his favorites and influences, it's the language and music of that first generation of Scots Cape Bretoners is his lifeblood. McFayden plays and sings as if this is true on Suilean Fosgailte, Fuasgladh Cinn (Open Eyes, Open Mind), and you can't help but be moved even if you have no idea what the words mean. Sometimes emotion runs so deep it speaks without words, and that's the case here. Suilean Fosgailte, Fuasgladh Cinn (Open Eyes, Open Mind) is a work of art, an essential listen, and a Wildy's World Certified Desert Island Disc.

You can learn more about Andrew McFayden at http://www.grianmcbuttons.ca/ or www.myspace.com/andrewmcfayden. You can order copies of Suilean Fosgailte, Fuasgladh Cinn (Open Eyes, Open Mind) from IndiePool.com, or you can purchase a download from iTunes
Posted by Wildy at 5:25 AM