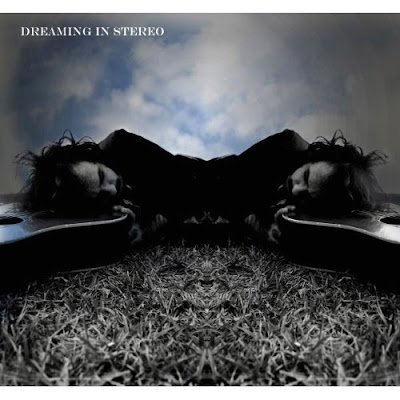 Miami Beach, Florida’s Dreaming In Stereo is the brainchild of neo-Guitar God Fernando Perdomo. Perdomo is a highly-in-demand session player as well as the lead guitarist for Transcendence. On Dreaming In Stereo he gets to show off his songwriting and vocal chops to good effect. Together with drummer Eddie Zyne (Hall & Oates) and joined by bass man Giuseppe Rodriguez on stage, Dreaming In Stereo plays with verve, wit and intelligence. Dreaming In Stereo’s self-titled debut album was released in July of 2009 and has already wracked up a fair amount of positive press for the band. Let’s check it out!

Dreaming In Stereo opens with the piano-based instrumental Sea Dreams, which sounds like scene setting music from a musical or a movie. It's a short piece, and pretty. Misery Loves Companies details our cultural fascination with drugs and their ability blunt psychic pain. It's a catchy tune; a bit awkward lyrically and a bit out of synch on the harmony vocals at times but a decent effort. Steal This Song is an altruistic musician's anthem that underlines an interesting dichotomy that occurs in the music business. Very often it's the musicians who have already made more money than they need who decry peer-to-peer sharing, while the hungry artists trying to make their way often welcome it because it opens up potential new fans. This is a great tune and makes a great point with a dash of wit.

Smile is a positive, simple song with a great string arrangement in accompaniment. I'm Not Gonna Move To L.A. is an amusing song about having the strength to be who you are, where you are, regardless of the consequences. The song is intelligently written with an element of dry humor, although the chorus does get repeated a few too many times. Let Me Love You and The Will To Love pair well as melancholy love songs that sounds like they'd be more comfortable in Country/Americana arrangements. Dreaming In Stereo closes out with Amicable, a six minute shot of meandering musical ambience full of melancholy and regret. The arrangement is quite pleasing, although the song does drag on a bit longer than might be optimal.

Dreaming In Stereo takes a wide-ranging musical course on their self-titled debut, from straight up rock arrangements to Moody Blues-style ambient/orchestral rock. The vocal talent is a bit mixed here, and pitch issues do present in the mastered recording at times both in the lead and harmony vocals. The songwriting is uneven but with some very strong moments (Steal This Song, I'm Not Gonna Move To L.A.). Dreaming In Stereo isn't a comedy band by any stretch, but they do seem to shine the most when they let their inherent wit inhabit their songs. Dreaming In Stereo is a decent debut that shows strong potential for growth, a distinct musicality and a creative spark that should serve them well.